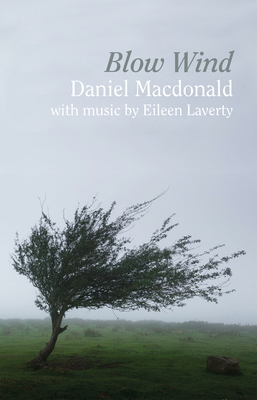 After years of running from her dysfunctional past, Sarah returns home to the family farm in Saskatchewan to find her mom Kathleen yelling into the wind, setting off a turbulent new chapter in her life. Instead of finding comfort in "home," Sarah learns nothing is how she remembers it, and with Kathleen's growing dementia, nothing will ever be the same again.

Two of Sarah's older siblings, Jolene and Steven, are more focused on the future ownership of the farm and are planning a supper that could help influence that decision. But Sarah turns her attention to Kathleen, who keeps chasing things that aren't there: a fox, a hill, the answers to questions only Sarah's adopted brother Tom holds the key to. When an unexpected outcome shocks the family at the supper, much more than the farm is at stake.

Blow Wind is a beautiful portrait--with musical accompaniment--of a family that together must build new paths forward while learning how to love, let go, and forgive.

Daniel Macdonald's plays for adults include Blow Wind, A History of Breathing, Velocity, Bang, MacGregor's Hard Ice Cream and Gas, and Pageant. He is also the author of numerous plays for young people, including These Things I Know, Flock Formations, Waking, Tragedie, The Romeo Project, Radiant Boy, Blind Love, and HERE. His work has been shortlisted for the Carol Bolt Award and the Saskatchewan Book Awards. He is also a two-time recipient of the City of Regina Writing Award, the Enbridge Playwrights Award, and the Saskatchewan Arts Award. He is writer-in-residence at St. Paul's Hospital with the Healing Arts. He also teaches at the University of Saskatchewan and heads the New Voices playwriting circle at Gordon Tootoosis Nikaniwin Theatre. Daniel hangs out with Melanie, little Xavier, and Fenster the cat in Saskatoon. Originally from Belfast, Northern Ireland, Eileen Laverty's family emigrated to Canada when she was six and, while she calls herself a Prairie girl, her Irish roots run deep. With the heart of a storyteller and a poet, her deeply intimate and stirring music will leave you with a sense of hope. Over the past two decades, Laverty has entertained audiences of all ages, as a solo performer and with her band. A look at the acts she has supported will underscore her universal appeal: the late Kenny Rogers, Tom Cochrane, Mary Black, John McDermott, and Ian Tyson. Eileen's track record includes several songwriting accolades and numerous radio and television appearances, and she is a frequent guest of the Saskatoon Symphony Orchestra. Eileen is also a dedicated teacher and coach, and a lifelong fan of The Beautiful Game--still playing when her schedule permits. She loves the outdoors. and many of her songs were composed in and around the northern forests and rivers of Saskatchewan. She lives in Saskatoon.