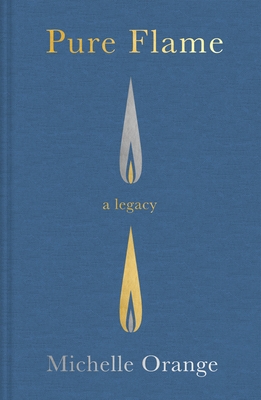 "Rich and moving . . . Pure Flame may be Orange’s legacy. It is already her gift." —Maggie Doherty, The New York Times (Editors' Choice)

During one of the texting sessions that became our habit over the period I now think of as both late and early in our relationship, my mother revealed the existence of someone named Janis Jerome.

So begins Michelle Orange’s extraordinary inquiry into the meaning of maternal legacy—in her own family and across a century of seismic change. Jerome, she learns, is one of her mother’s many alter egos: the name used in a case study, eventually sold to the Harvard Business Review, about her mother’s midlife choice to leave her husband and children to pursue career opportunities in a bigger city. A flashpoint in the lives of both mother and daughter, the decision forms the heart of a broader exploration of the impact of feminism on what Adrienne Rich called “the great unwritten story”: that of the mother-daughter bond.

The death of Orange’s maternal grandmother at nearly ninety-six and the fear that her mother’s more “successful” life will not be as long bring new urgency to her questions about the woman whose absence and anger helped shape her life. Through a blend of memoir, social history, and cultural criticism, Pure Flame pursues a chain of personal, intellectual, and collective inheritance, tracing the forces that helped transform the world and what a woman might expect from it. Told with warmth and rigor, Orange’s account of her mother’s life and their relationship is pressurized in critical and unexpected ways, resulting in an essential, revelatory meditation on becoming, selfhood, freedom, mortality, storytelling, and what it means to be a mother’s daughter now.

Michelle Orange is the author of the essay collection This Is Running for Your Life, named a best book of 2013 by The New Yorker. Her writing has appeared in publications including The New Yorker, Harper’s Magazine, The New York Times, Bookforum, McSweeney’s, and the Virginia Quarterly Review, where she is a contributing editor. She teaches in the graduate writing programs at Goucher College and Columbia University.

"Rich and moving . . . Orange skirts the traps of the mother-daughter memoir by going beyond personal history. She interleaves memories of her mother and maternal grandmother with discussions of writing by Simone de Beauvoir, Adrienne Rich and Susan Sontag, among others. . . . After my first reading, certain scenes haunted me for a week . . . Pure Flame may be Orange’s legacy." —Maggie Doherty, The New York Times (Editors' Choice)

"Sometimes achingly sad, but often warm and evocative, this reckoning between mothers and daughters is a brilliant work of feminist critique." —Lauren Puckett-Pope, Elle

"A remarkably seamless weaving of family memoir, social history, and cultural criticism . . . A book that ought to appeal to any serious reader, regardless of gender." —Ron Cassie, Baltimore Magazine

“Powerful . . . [Orange] is bracingly honest as she wrestles with the good and bad of her mother’s choices, trying to forge a statement on the relationship that is at once honest, fair, and compassionate.” —Veronica Esposito, Literary Hub

“Nuanced and original . . . The decision to write about her mother was not taken lightly . . . In Pure Flame, however, [Orange] achieves her objective, ‘to build a frame so fierce and broad it might finally hold us both,’ with a story that does justice to each individual woman.” —Terri Apter, The Times Literary Supplement

"Orange embarked on this fiercely intelligent memoir—which doubles as a critique of feminism and maternal failure – to try to come to terms with her mother’s decision and their decades-long estrangement." —Emily Donaldson, The Globe and Mail

"In a weave of memoir, history, and reflection, Orange judiciously considers the lives of her mother and her mother’s mother within the larger context of women’s ongoing battles for equality and liberation . . . In gleaming prose of tensile strength, Orange considers the painful paradoxes of women's lives and mother-daughter relationships, drawing on the writings of Simone de Beauvoir, Susan Sontag, and Adrienne Rich, while tracking her seemingly indomitable mother’s long-brewing lung disease and her ultimate battle between mind and body." —Booklist

"In Pure Flame, Michelle Orange geniusly rewrites and reinvigorates what Adrienne Rich called 'the great unwritten story.' In doing so, she recasts the notion of maternal legacy and fills it with pointed mystery and informed sincerity. Pure Flame is a tutorial in bending creative nonfiction." —Kiese Laymon, author of Heavy: An American Memoir

"Precisely written . . . A brilliant mixture of memoir and criticism centered in [Orange's] relationship with her mother, and also an investigation into feminism, what it has meant (and hasn’t meant) through different generations, and also what it means to be a woman now." —Jami Attenberg, author of All This Could Be Yours

"The best book I’ve read this year, Pure Flame is both a pleasure to read and a work of high seriousness. A meditation on mothers and daughters and an unsparing, stylishly written, and profoundly loving exploration of her own relationship with her mother, the book is as original as it is powerful. To be with Orange as she reckons with each stage of her mother's life and with her own shifting assessments is to experience a joy that is at once intellectual and moral: this is a book that expands and breaks your heart, not with sentimentality but with its intelligence and compassion." —Adelle Waldman, author of The Love Affairs of Nathaniel P.

“There’s an irresistible question at the center of this book: In her attempt to avoid becoming her mother, did Michelle Orange lose herself, and her mother too? The book changes as it goes around corners: a mystery novel, an inquiry, a call and response poem—Pure Flame is a provocative, meditative, funny, feminist adventure about two women trying to tell each other the stories that matter while there’s still time.” —Alexander Chee, author of How to Write an Autobiographical Novel

"Opening Pure Flame is like stepping into a cathedral. Michelle Orange makes elaborate leaps of association and elegant sentences seem effortless to construct, but only a writer as skilled as Orange can make a reader feel like a collaborator, rather than a mere witness to the artistry. Pure Flame is as lyrical and idea-driven as it is propulsive and moving. I already can’t wait to reread it." —Jeannie Vanasco, author of Things We Didn't Talk About When I Was a Girl