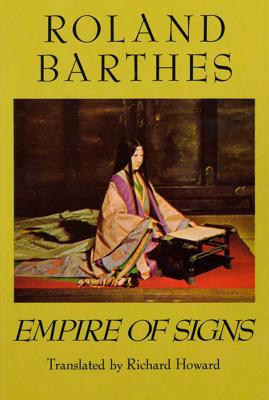 With this book, Barthes offers a broad-ranging meditation on the culture, society, art, literature, language, and iconography--in short, both the sign-oriented realities and fantasies--of Japan itself.

Richard Howard is a poet, scholar, teacher, critic, and translator. Paper Trail is published simultaneously by FSG with Howard's Inner Voices: Selected Poems, 1963-2003. He teaches at Columbia University and is poetry editor of The Paris Review.
“If Japan did not exist, Barthes would have had to invent it--not that Japan does exist in Empire of Signs, for Barthes is careful to point out that he is not analyzing the real Japan, there is no terrible innerness as in the West, no soul, no God, no fate, no ego, no grandeur, no metaphysics, no 'promotional fever' and finally no meaning . . . For Barthes Japan is a test, a challenge to think the unthinkable, a place where meaning is finally banished. Paradise, indeed, for the great student of signs.” —Edmund White, The New York Times Book Review