Divided by God: America's Church-State Problem--and What We Should Do About It (Paperback) 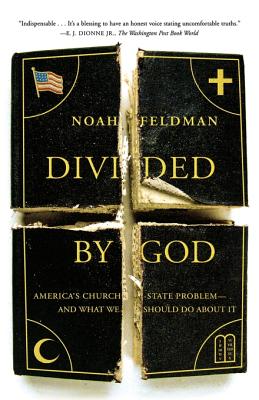 Divided by God: America's Church-State Problem--and What We Should Do About It (Paperback)

Even before George W. Bush gained reelection by wooing religiously devout "values voters," it was clear that church-state matters in the United States had reached a crisis. With Divided by God, Noah Feldman shows that the crisis is as old as this country--and looks to our nation's past to show how it might be resolved.

Today more than ever, ours is a religiously diverse society: Muslim, Hindu, and Buddhist as well as Catholic, Protestant, and Jewish. And yet more than ever, committed Christians are making themselves felt in politics and culture.

What are the implications of this paradox? To answer this question, Feldman makes clear that again and again in our nation's history diversity has forced us to redraw the lines in the church-state divide. In vivid, dramatic chapters, he describes how we as a people have resolved conflicts over the Bible, the Pledge of Allegiance, and the teaching of evolution through appeals to shared values of liberty, equality, and freedom of conscience. And he proposes a brilliant solution to our current crisis, one that honors our religious diversity while respecting the long-held conviction that religion and state should not mix.

Divided by God speaks to the headlines, even as it tells the story of a long-running conflict that has made the American people who we are.

Noah Feldman is the Felix Frankfurter Professor of Law at Harvard University as well as a Senior Fellow of the Society of Fellows and a member of the American Academy of Arts and Sciences. He is a contributing writer for Bloomberg View.

Before joining the Harvard faculty, Feldman was Cecelia Goetz Professor of Law at New York University School of Law. He was named a Carnegie Scholar in 2005. In 2004, he was a visiting professor at Yale Law School and a fellow of the Whitney Humanities Center. In 2003, he served as senior constitutional advisor to the Coalition Provisional Authority in Iraq, and advised members of the Iraqi Governing Council on the drafting of the Transitional Administrative Law or interim constitution. He served as a law clerk to Justice David H. Souter of the U.S. Supreme Court (1998–1999). Selected as a Rhodes Scholar, he earned a D. Phil. in Islamic Thought from Oxford University and a J.D. from Yale Law School, serving as Book Reviews Editor of the Yale Law Journal. He received his A.B. summa cum laude in Near Eastern Languages and Civilizations from Harvard University in 1992, finishing first in his class.

He is the author of several books, including Cool War: The Future of Global Competition; the award winning and acclaimed Scorpions: The Battles and Triumphs of FDR’s Great Justices; The Fall and Rise of the Islamic State; Divided By God: America's Church-State Problem and What We Should Do About It; and After Jihad: America and the Struggle for Islamic Democracy. With Kathleen Sullivan, he coauthored textbooks on constitutional and first amendment law. He has worked as a contributing writer for the New York Times Magazine.

"A reasoned, reasonable and consensus-seeking argument that is, of course, in danger of going unheard amid all the shouting." - Kirkus Reviews