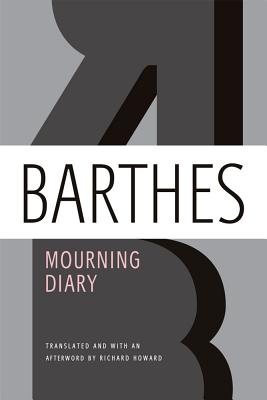 "In the sentence ‘She's no longer suffering,' to what, to whom does ‘she' refer? What does that present tense mean?" —Roland Barthes, from his diary

The day after his mother's death in October 1977, Roland Barthes began a diary of mourning. For nearly two years, the legendary French theorist wrote about a solitude new to him; about the ebb and flow of sadness; about the slow pace of mourning, and life reclaimed through writing. Named a Top 10 Book of 2010 by The New York Times and one of the Best Books of 2010 by Slate and The Times Literary Supplement, Mourning Diary is a major discovery in Roland Barthes's work: a skeleton key to the themes he tackled throughout his life, as well as a unique study of grief—intimate, deeply moving, and universal.

Richard Howard teaches in the School of the Arts at Columbia University, USA. He has also translated works by Barthes, Foucault and Todorov.

Richard Howard teaches in the School of the Arts at Columbia University, USA. He has also translated works by Barthes, Foucault and Todorov.

“A revelation to readers of the great Barthes.” —Judith Thurman, The New Yorker podcast

“This book's unvarnished quality is the source of its wrecking cumulative power. Barthes's ironic intellect is here wrapped around his nakedly beating heart.” —Dwight Garner, The New York Times

“Precise and touching memories intersect with spare and at times desperate notes on time, death and grief, written despite ‘the fear of making literature out of it.'” —Julian Barnes, The Times Literary Supplement

“A collection of aphorisms, sadnesses, self-analysis: a journal of savage intimacy.” —Adam Thirlwell, The New Republic