Jack Be Nimble: The Accidental Education of an Unintentional Director (Paperback) 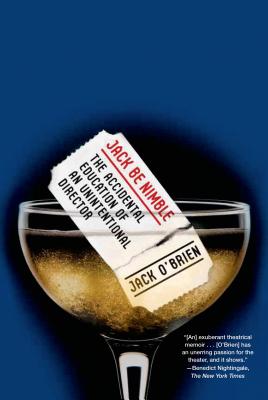 Jack Be Nimble: The Accidental Education of an Unintentional Director (Paperback)

A warm, witty tell-all and history of American regional theater, from one of our best-loved directors

For Jack O'Brien, there's nothing like a first encounter with a great performer, nothing like the sound of an audience bursting into applause. In short, there's nothing like the theater.
Following a fairly normal Midwestern childhood, O'Brien hoped to make his mark by writing lyrics for Broadway but was instead pulled into the growing American regional theater movement by the likes of John Houseman, Helen Hayes, Ellis Rabb, and Eva Le Gallienne. He didn't intend to become a director, or to direct some of the most brilliant—and sometimes maddening—personalities of the age, but in a charming, hilarious, and unexpected way, that's what happened.
O'Brien has had a long, successful career on Broadway and as artistic director of San Diego's Old Globe Theatre, but the history of the movement that shaped him has been overlooked. In the middle of the last century, some extraordinary people forged a link in the chain connecting European influences such as the Moscow Art Theatre and Great Britain's National Theatre with the flourishing American theater of today. O'Brien was there to see and record it all, in beautifully vivid detail.
Funny, exuberant, unfailingly honest, Jack Be Nimble is the tale of those missing heroes, performances, and cultural battles. It is also the irresistible story of one of our best-loved theater directors, growing into his passion and discovering what he is capable of.

Jack O'Brien was born in 1939 and is an American director, producer, writer, and lyricist who served as the artistic director of the Old Globe theatre in San Diego from 1982 to 2007. He has won three Tony Awards and has been nominated for seven more, and he has won five Drama Desk Awards. He is the author of Jack Be Nimble. He lives in Connecticut with an exceptional Norwich terrier named Coda.

“[An] exuberant theatrical memoir . . . [O'Brien] has an unerring passion for the theater, and it shows.” —Benedict Nightingale, The New York Times

“Jack Be Nimble is an ever-interesting chronicle offering a perceptive overview of the dramatic stage of the 1960s and 1970s, but it is enhanced by being written so enjoyably well . . . Entertaining, fascinating, and pretty much delectable.” —Steven Suskin, Playbill

“Backstage and spotlight histrionics are rendered in vivacious, eloquent but irrepressibly chatty prose. O'Brien doesn't dwell on directing technique or the minutiae of running a company, but he captures something more valuable: a true portrait of the artistic temperament, the spirit of repertory.” —David Cote, American Theatre

“An irreplaceable insider account of one of the most dynamic theatrical scenes of that era.” —Publishers Weekly

“Theater history buffs will relish O'Brien's vivid descriptions and cogent assessments . . . O'Brien's evocative, loving reminiscences make clear how indelibly his artistic vision was forged in the crucible of regional and repertory theater, among some of the giants of the American stage. [Jack Be Nimble is] smart, gossipy and oh-so-dramatic.” —Kirkus Reviews

“Jack Be Nimble is more than just nimble. In telling his own exuberant story, Jack O'Brien is also telling the story of an essential and nearly forgotten chapter in American theater, the repertory movement of the 1950s and '60s. Jack presents it as a dazzling unfolding drama with an unforgettable leading man, the brilliant and complicated Ellis Rabb. I loved this book.” —John Lithgow, author of Drama: An Actor's Education

“Quite simply and honestly, Jack Be Nimble is the best theatrical memoir since Moss Hart's Act One. This hilarious and touching book is a must-read for any student of theater, for anyone who loves the theater, and for anyone who doesn't love the theater, because Jack will make you fall in love with it. It's just that good.” —Nathan Lane

“Jack Be Nimble is a modest, engaging autobiography of one of our most successful stage directors (Hair Spray,The Full Monty, Porgy and Bess) and his extensive experiences in regional repertory with the likes of Helen Hayes, John Houseman, and Rosemary Harris. It is also a portrait of a genius mentor--Ellis Rabb--whom he serves faithfully but eventually must reject. It is a moment out of Greek tragedy.” —Edmund White, author of City Boy