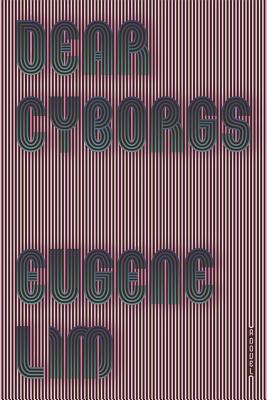 One of Vol. 1 Brooklyn's Favorite Fiction Books of 2017, a Literary Hub Staff Favorite Book of 2017, and one of BOMB Magazine's "Looking Back on 2017: Literature" Selections.

"Wondrous . . . [A] sense of the erratic and tangential quality of everyday life—even if it’s displaced into a bizarre, parallel world—drifts off the page, into the world you see, after reading Dear Cyborgs." —Hua Hsu, The New Yorker

In a small Midwestern town, two Asian American boys bond over their outcast status and a mutual love of comic books. Meanwhile, in an alternative or perhaps future universe, a team of superheroes ponder modern society during their time off. Between black-ops missions and rescuing hostages, they swap stories of artistic malaise and muse on the seemingly inescapable grip of market economics.

Gleefully toying with the conventions of the novel, Dear Cyborgs weaves together the story of a friendship’s dissolution with a provocative and timely meditation on protest. Through a series of linked monologues, a lively cast of characters explores narratives of resistance—protest art, eco-terrorists, Occupy squatters, pyromaniacal militants—and the extent to which any of these can truly withstand and influence the cold demands of contemporary capitalism. All the while, a mysterious cybernetic book of clairvoyance beckons, and trusted allies start to disappear.

Entwining comic-book villains with cultural critiques, Eugene Lim’s Dear Cyborgs is a fleet-footed literary exploration of power, friendship, and creativity. Ambitious and knowing, it combines detective pulps, subversive philosophy, and Hollywood chase scenes, unfolding like the composites and revelations of a dream.

Eugene Lim is the author of Fog & Car, The Strangers, and Dear Cyborgs. His writing has appeared in Fence, the Denver Quarterly, Little Star, Dazed, The Brooklyn Rail, and elsewhere. He is the founder and managing editor of Ellipsis Press and works as a librarian in a high school. He lives in Queens, New York.

"Dear Cyborgs is a novel of the future. It’s surprising, and—while giving despair its full measure—it’s surprisingly inspiring. A Bolano-esque labyrinth of shaggy dog stories flow through the narrator, describing the existential and physical conditions of a present in which it’s easier to imagine the end of the world than the end of capitalism, but it’s written in calm and succinct, elegant prose. Lim nails the amnesia of sensory overload perfectly." —Chris Kraus, BOMB

"Wondrous . . . [Lim's] writing is confident and tranquil; he has a knack for making everyday life seem strange—or, in the case of Dear Cyborgs, for making revolution seem like the most natural thing possible. His writing is transfixing from page to page, filled with digressive meditations on small talk and social protest, superheroes, terrorism, the art world, and the status of being marginal . . . There’s an intoxicating, whimsical energy on every page. Everything from radical art to political protest gets absorbed into the rhythms of everyday life . . . [A] sense of the erratic and tangential quality of everyday life—even if it’s displaced into a bizarre, parallel world—drifts off the page, into the world you see, after reading Dear Cyborgs." —Hua Hsu, The New Yorker's Page Turner

"Dear Cyborgs is a novel about art and resistance, and how they may spur each other on, or frustrate their respective goals. In structure it resembles the great mid-century metafictions . . . Eugene Lim’s super-comrades, with their cultural disaffection and nuanced political opinions, offer a rather more compelling version of a collective consciousness." —David Hobbs, Times Literary Supplement

"Lim's third novel might be the most delightful read you'll find all summer . . . Through seamlessly incorporated meditations on political protest and radical art, Dear Cyborgs is an effortless page turner that dares the reader to believe in the power of the imagination." —Anelise Chen, The Village Voice

"Eugene Lim's Dear Cyborgs is a novel of ideas, small, elegant ideas about art and protest, and one of the most striking literary works to emerge from the Occupy movement . . . The possible futility, complicity, and co-optation of protest are the ideas Dear Cyborgs circles around without ever giving up on the idea that resistance is essential . . . I had expected the decade's wave of protests to yield a raft of conventional social novels—some earnest, some satirical, perhaps not a few reactionary—but in Dear Cyborgs Lim has delivered something far more idiosyncratic, intricate, and useful: a novel that resists and subverts conventions at every turn." —Christian Lorentzen, New York

"[Dear Cyborgs] is stuffed with more complex ideas than many books three times its size . . . The ultimate message of Dear Cyborg remains open to interpretation, but adventurous readers will be glad they teamed up with Lim." —Michael Berry, San Francisco Chronicle

"I think it is rare to encounter self-aware, genre-spliced postmodernism that is this worldly and purposeful, or pop that is this utilitarian, serious and searching, or timely state-of-the-nation reckonings that are this optimistic, open, and kindhearted. The union of seeming opposites, co-existing across 163 pages is, for me, a reason to be cheerful . . . [Dear Cyborgs] is quite an achievement." —JW McCormack and Rosie Clarke, Electric Literature

"This book sets out to defy categorization, and it thoroughly succeeds. A wild and wildly intelligent work, Dear Cyborgs skillfully employs elements of essay, noir, fantasy, and pop in order to question the limitations of identity in the Internet age." —Robert Martin, Rain Taxi Review

"A short but important novel . . . Lim['s] experiments with form . . . willingly mutate and fragment to mimic fractured lives and disaggregated worlds. It's a quirk that becomes a virtue in a novel about austerity, art, and everyday politics." —Jonathon Sturgeon, The Baffler

"Dear Cyborgs is as daring and exciting as it is thoughtful, and perhaps disheartening only because of the context in which it exists." —Thomas Michael Duncan, Necessary Fiction

"Two radically different story lines—one involving a short-lived friendship between two Asian-American boys in the Midwest, the other an ongoing philosophical debate amongst a team of superheroes—are cleverly tied together in this short, sly, unorthodox novel . . . The core relationships, whether they’re between estranged childhood friends or opinionated superhumans, are real and profoundly moving." —Publishers Weekly, starred review

"Dear Cyborgs . . . sings the tune of language itself, music that Gertrude Stein and Gordon Lish could get behind, wherein the sentence is less a part than a whole unto itself." —Josh Cook, Virginia Quarterly Review

“One of the smartest, strangest books I’ve read. This is a document of a side of the Midwest that goes largely uncelebrated: the population of tech-savvy, art-forward, and too often marginalized voices that shape the region’s identity from the edges. Dear Cyborgs is brilliant in its blending of academic investigation and pop-culture tropes, and structurally invigorating from start to finish. I'm not quite sure what to call it, other than a total blast.” —Robert Martin, Midwest Independent Booksellers Association

"Eugene Lim tells his sly superhero tales in a kind of hard-boiled deadpan—a voice at once incongruously comic and playfully soulful. Beneath the dry wit there’s an ache of loneliness, an echo of every comic-book reader’s yearning for the camaraderie of the super team, the intimate enmity of the nemesis." —Peter Ho Davies, author of The Fortunes

"[An] entertaining reflection on art, resistance, heroes, and villains . . . eerily reflective of our fractured times, darting from subject to subject with the speed of a mouse click. A colorful meditation on friendship and creation nested within a fictional universe." —Kirkus Reviews

"Eugene Lim is amazing because he's really adventurous with form and style ... It's so hard to break apart fiction and do something really unusual with it, and to do it so gracefully." —Dennis Cooper

Praise for The Strangers:
"Beautifully written, so precise and accurate to real life." —Lydia Davis

"Beautiful, original, with delicious surprises lurking at the heart of sentences, of events, of all the engines of communication." —Harry Mathews

Praise for Fog and Car:
"In this astonishing, assured first novel Eugene Lim intertwines elegant poetics with a fantastic plot, rife with love, mystery, malaise, and the supernatural. His gift for ingenious, startling permutations of language and plot make for a memorable, mesmerizing read. It was hard for me to put Fog and Car down; harder for me to stop thinking about." —Lynn Crawford

"In this debut novel . . . Eugene Lim doesn’t as much collect and catalogue the fragments of lives shared, as artfully piece them into a puzzle reflective of players whose moves were induced by seemingly inconsequent forces . . . [A] phenomenal ability to nestle revelatory gems in the corners of his muscular text." —Erin McKnight, Bookslut