We Were Once a Family: A Story of Love, Death, and Child Removal in America (Hardcover) 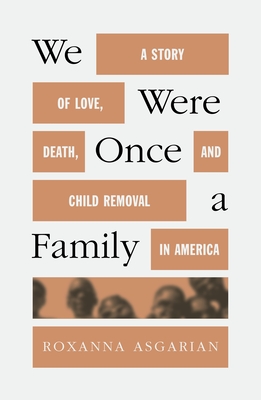 We Were Once a Family: A Story of Love, Death, and Child Removal in America (Hardcover)

The shocking, deeply reported story of a murder-suicide that claimed the lives of six children—and a searing indictment of the American foster care system.

On March 26, 2018, rescue workers discovered a crumpled SUV and the bodies of two women and several children at the bottom of a cliff beside the Pacific Coast Highway. Investigators soon concluded that the crash was a murder-suicide, but there was more to the story: Jennifer and Sarah Hart, it turned out, were a white married couple who had adopted the six Black children from two different Texas families in 2006 and 2008. Behind the family's loving facade, however, was a pattern of abuse and neglect that went ignored as the couple withdrew the children from school and moved across the country. It soon became apparent that the State of Texas knew very little about the two individuals to whom it had given custody of six children—with fateful consequences.

In the manner of Adrian Nicole LeBlanc's Random Family and other classic works of investigative journalism, Roxanna Asgarian’s We Were Once a Family is a revelation of vulnerable lives; it is also a shattering exposé of the foster care and adoption systems that produced this tragedy. As a journalist in Houston, Asgarian became the first reporter to put the children’s birth families at the center of the story. We follow the author as she runs up against the intransigence of a state agency that removes tens of thousands of kids from homes each year in the name of child welfare, while often failing to consider alternatives. Her reporting uncovers persistent racial biases and corruption as children of color are separated from birth parents without proper cause. The result is a riveting narrative and a deeply reported indictment of a system that continues to fail America’s most vulnerable children while upending the lives of their families.

Roxanna Asgarian is a Texas-based journalist who writes about courts and the law for The Texas Tribune. Her work has appeared in The Washington Post, New York, and Texas Monthly, among other publications. She received the 2022 J. Anthony Lukas Work-in-Progress Award for We Were Once a Family.

“Roxanna Asgarian’s stunning debut, We Were Once A Family, paints a stark picture of the systemic failures of our child welfare system. Asgarian shows the myriad ways in which the very institutions charged with our children's safety often exacerbate their predicaments—and sometimes, as with the Hart family, can end in unmitigated and unnecessary tragedy. This book is sobering, but also urgent, advocating for change with the strength of a howl in the wild.” —Rachel Louise Snyder, author of No Visible Bruises

"Roxanna Asgarian could have written another sensational account of the six Black children murdered by the white couple who adopted them. Instead, We Were Once A Family is not only the most in-depth investigation of the tragedy, but also a devastating exposé of the unjust and inhumane child welfare system that caused it to happen. Asgarian shatters the dominant rosy adoption narrative popularized by the government and media by telling the forgotten experiences of foster children, adoptees, and birth families—all traumatized by the forcible separation from their loved ones. This riveting book will raise public awareness of the urgent need to end our disastrous approach to struggling families by radically reimagining child welfare policies and building community-based supports that truly keep children safe." —Dorothy Roberts, author of Torn Apart: How the Child Welfare System Destroys Black Families—And How Abolition Can Build A Safer World

"Roxanna Asgarian is one of our most important reporters working today, covering crime, the courts, and child welfare with boundless empathy, rigorous journalism, and unforgettable prose. We Were Once A Family shines a necessary light on all of the systemic forces that made a seemingly unthinkable family tragedy all too preventable—and thus, all the more infuriating. This book astonished me, in part because it shows why American society continues to let children down, over and over again." —Sarah Weinman, author of The Real Lolita and Scoundrel

"After Jennifer and Sarah Hart plunged themselves and their six children over a cliff in California, something strange happened: the media focused almost entirely on these white mothers, leaving the stories of the Black children they adopted—and later murdered—untold. Through meticulous and empathetic investigative reporting that stretches from California to Texas and many places in between, Roxanna Asgarian has not just rectified that injustice —she has provided a systemic critique of the predatory, racist child welfare system that is every bit as urgent and undeniable as the movements for police abolition in 2020." —Ethan Brown, New York Times bestselling author of Murder in the Bayou: Who Killed The Women Known as the Jeff Davis 8?

"Powerful and urgent, We Were Once A Family is a crucial investigation into the deeply flawed system of child 'protection' that forcibly separates families, punishes marginalized communities, perpetuates inequality, and causes generational harm. This book creates space for the personal stories of those who are so often silenced to be heard, especially the children who were taken from their families and communities, disappeared across state lines, disbelieved when they reported abuse, incarcerated in for-profit institutions, and ultimately killed by those paid to care for them. With an industry of fostering and adoption being pushed as an alternative to reproductive rights, light must be shed on the systemic abuse so many children face when taken from families who are so often themselves survivors of systemic violence and inequality. Through unflinching reporting, immersive prose and direct testimonies from the families whose children were taken, Asgarian's book is a call for justice and systemic change that must be heard." —Caelainn Hogan, author of Republic of Shame: How Ireland Punished “Fallen Women” and Their Children