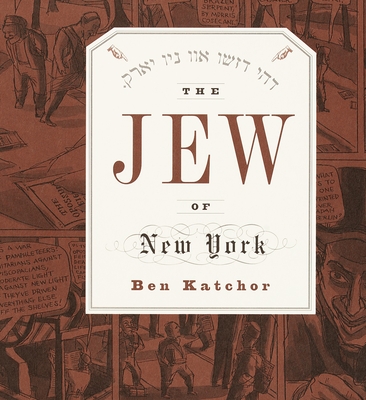 
Special Order—Subject to Availability
In 1825, Mordecai Noah, a New York politician and amateur playwright possessed of a utopian vision, summoned all the lost tribes of Israel to an island near Buffalo in the hope of establishing a Jewish state. His failed plan, a mere footnote in Jewish-American history, is the starting point for Ben Katchor's brilliantly imagined epic that unfolds on the streets of New York a few years later.

A disgraced kosher slaughterer, an importer of religious articles and women's hosiery, a pilgrim peddling soil from the Holy Land, a latter-day Kabbalist, a man with plans to carbonate Lake Erie--these are just some of the characters who move through Katchor's universe, their lives interwoven in a common struggle to settle into the New World even as it erupts into a financial frenzy that could as easily leave them bankrupt as carry them into the future.
Ben Katchor is the author of The Jew of New York and Julius Knipl, Real Estate Photographer. A 2000 MacArthur Foundation Fellow, he lives in New York.
"The most poetic, deeply layered artist ever to draw a comic strip."