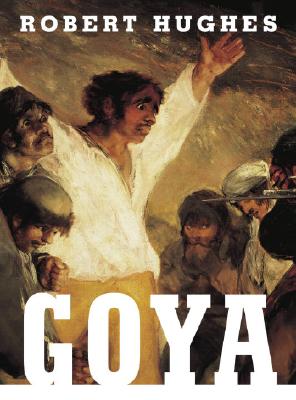 
Special Order—Subject to Availability
Robert Hughes, who has stunned us with comprehensive works on subjects as sweeping and complex as the history of Australia (The Fatal Shore), the modern art movement (The Shock of the New), the nature of American art (American Visions), and the nature of America itself as seen through its art (The Culture of Complaint), now turns his renowned critical eye to one of art history’s most compelling, enigmatic, and important figures, Francisco José de Goya y Lucientes. With characteristic critical fervor and sure-eyed insight, Hughes brings us the story of an artist whose life and work bridged the transition from the eighteenth-century reign of the old masters to the early days of the nineteenth-century moderns.

With his salient passion for the artist and the art, Hughes brings Goya vividly to life through dazzling analysis of a vast breadth of his work. Building upon the historical evidence that exists, Hughes tracks Goya’s development, as man and artist, without missing a beat, from the early works commissioned by the Church, through his long, productive, and tempestuous career at court, to the darkly sinister and cryptic work he did at the end of his life.
In a work that is at once interpretive biography and cultural epic, Hughes grounds Goya firmly in the context of his time, taking us on a wild romp through Spanish history; from the brutality and easy violence of street life to the fiery terrors of the Holy Inquisition to the grave realities of war, Hughes shows us in vibrant detail the cultural forces that shaped Goya’s work.

Underlying the exhaustive, critical analysis and the rich historical background is Hughes’s own intimately personal relationship to his subject. This is a book informed not only by lifelong love and study, but by his own recent experiences of mortality and death. As such this is a uniquely moving and human book; with the same relentless and fearless intelligence he has brought to every subject he has ever tackled, Hughes here transcends biography to bring us a rich and fiercely brave book about art and life, love and rage, impotence and death. This is one genius writing at full capacity about another—and the result is truly spectacular.
Robert Hughes was born in Australia in 1938. Since 1970 he has lived and worked in the United States, where until 2001 he was chief art critic for Time, to which he still contributes. His books include The Shock of the New, The Fatal Shore, Nothing If Not Critical, Barcelona, The Culture of
Complaint, and American Visions. He is the recipient of a number of awards and prizes for his work.
"Robert Hughes's dazzling new study of Goya not only conveys the range and prescience of the artist's work with enormous acuity and verve, but also conjures the world of 18th- and early 19th-century Spain with vivid, pictorial ardor.
Writing in fierce, tactile prose, Mr. Hughes jolts the reader into a visceral appreciation of Goya's art.
–Michiko Kakutani, NewY orkTimes
"[Goya] is all you could ask for and more. Sturdy in its organisation, its interpretations, its common sense, it nevertheless fizzes with insights and hops with enthusiasm. There is not a dull sentence... Hughes has found his ideal subject."
–Sebastian Smee, The Spectator

"The prolific Hughes offers a refreshing take on this great artist, about whom so much has been written. His powerful intelligence and eloquence... make this a book that will be widely read and enjoyed... [Goya] leaves us in no doubt that Hughes is one of the most forceful art critics writing today."
–Frances Spalding, Literary Review, London

"[Goya] is right up there with his magna opera–The Shock of the New (1980) and American Visions (1997)–and confirms his stature as the most invigorating writer on art currently at work. A valuable resource for students of Goya–and a must for fans of Robert Hughes."
–Anthony Quinn, London Telegraph


"... a remarkably vital, delectably discursive, and deeply affecting study... Hughes brings
eighteenth- and ninetheenth-century Madrid to dynamic life and insightfully
dissects every aspect of Goya's ever-evolving paintings and etchings,
indelible works that grew steadily darker, more disturbing, and increasingly
radical in their indictment of injustice and violence. Hughes' profound
appreciation for Goya's genius and "immense humanity" will inspire readers to
look to Goya's magnificent, shocking, and clarifying works as to a polestar
as we grapple with the inhumanity of our times."
–starred Booklist review


"… a clever combination of the two genres at which Hughes has simultaneously excelled in his writing–national history and art criticism."
–Waldemar Januszczak, London Sunday Times Magazine

"… Hughes succeeds where others have failed… As far as anyone can, he instinctively understands his man. He also writes beautifully… this book is a marvelous study."
–Michael Prodger, Sunday Telegraph, London