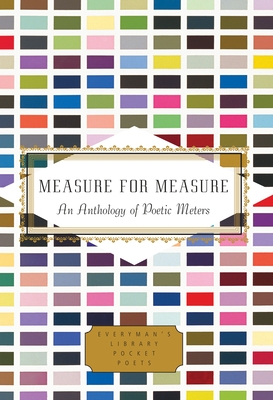 
Not On Our Shelves—Ships in 1-5 Days
This comprehensive and joyous celebration of metered verse brings together some of the best rhythmic lines in literature.

After a century dominated by free verse, there is a new excitement about rediscovering poetry’s ancient musical and performative roots. Iambic pentameter is the most familiar meter for most readers, but it only scratches the surface of the extraordinary diversity of rhythmic patterns that poets have employed over the ages. That astonishing variety is fully explored in this one-of-a-kind anthology, packed with great poems that beg to be read aloud. Measure for Measure is organized by meter, with brief explanatory headnotes covering accentual meter, trochees, anapests, dactyls, iambs, ballad meter, and more exotic species like amphibrachs, dipodics, hendecasyllabics, sapphics, and more. The entrancing examples of each meter are drawn from a wide range of poetic traditions, from Ovid and Sappho to Shakespeare and Milton, encompassing the Romantics, the Victorians, ballads, folk songs, poets of the Harlem Renaissance, and modern-day poets. Whether performed aloud or enjoyed in silence, Measure for Measure is a treat for the ear, the heart, and the mind.
Annie Finch is the author or editor of fifteen books of poetry, translation, and criticism. She has received the 2009 Robert Fitzgerald Award and fellowships from the Black Earth Institute and the Wesleyan Writers Conference. Finch's music, art, and theater collaborations include the opera Marina (American Opera Projects, 2003). Her work has been translated into numerous languages, and she has performed her poetry across the U.S. and Europe. She currently lives in Maine where she directs Stonecoast, the low-residency MFA program at the University of Southern Maine.

Alexandra Oliver was born in Vancouver, Canada. She holds an M.A. in Drama/Cinema Studies from The University of Toronto and an M.F.A. in Creative Writing from The University of Southern Maine. Her most recent poetry collection, Meeting the Tormentors in Safeway (Biblioasis, 2013) was the recipient of the 2014 Pat Lowther Award and was named a Canadian Poetry Book of the Year by The National Post.   A co-editor of the Canadian formalist review The Rotary Dial, she also writes articles on film and contemporary art.