The Killing of Crazy Horse (Paperback) 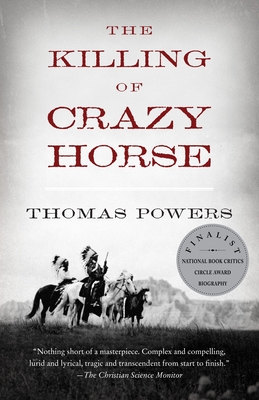 The Killing of Crazy Horse (Paperback)

“Thomas Powers has poured his heart and soul into this book, and the reader will do the same. It is a sad tale masterfully told as Powers weaves exhaustive research into the spellbinding story of Crazy Horse, the great Sioux warrior and leader, a little-discussed and often misunderstood player in American History. This book possesses the kind of immediacy only seen in the very best narrative nonfiction, and will become an important source for years to come.”
— Sheryl Cotleur, Book Passage, Corte Madera, CA

With the Great Sioux War as background and context, and drawing on many new materials, Thomas Powers establishes what really happened in the dramatic final months and days of Crazy Horse’s life.

He was the greatest Indian warrior of the nineteenth century, whose victory over General Custer at the battle of Little Bighorn in 1876 was the worst defeat ever inflicted on the frontier army. But after surrendering to federal troops, Crazy Horse was killed in custody for reasons which have been fiercely debated for more than a century. The Killing of Crazy Horse pieces together the story behind this official killing.

Thomas Powers is a Pulitzer Prize–winning journalist and writer best known for his books on the history of intelligence organizations. Among them are Intelligence Wars: American Secret History from Hitler to al-Qaeda; Heisenberg’s War: The Secret History of the German Bomb; and The Man Who Kept the Secrets: Richard Helms and the CIA. The Killing of Crazy Horse won the Los Angeles Times Book Prize for history; the Western Writers of America Spur Award for historical nonfiction; and was a finalist for the National Book Critics Circle Award in the biography category. For most of the last decade Powers kept a 1984 Volvo at a nephew’s house in Colorado, which he drove on frequent trips to the northern Plains. He lives in Vermont with his wife, Candace.

“Nothing short of a masterpiece. Complex and compelling, lurid and lyrical, tragic and transcendent from start to finish.”
—The Christian Science Monitor

“Chilling and unforgettable. . . . A portrait done in the blood of the heartland, a heart still beating after all these years. Powers has given us a great book, a great painting of that still-beating heart.”
—The Washington Post

“Richly textured. . . . Carefully and elegantly wrought. . . . Powers tells us much that is revealing and moving about the Sioux in their last days as free warriors.”
—The New York Times Book Review

“A story rife with intrigue, rivalry, factionalism, jealousy and betrayal. Powers works through this maze with admirable insight. . . . The Killing of Crazy Horse will stand the test of time.”
—The Wall Street Journal

“Masterful. . . . A fascinating portrait of the great and mysterious Sioux war chief and of the pivotal era in hour history in which he lived and died. . . . [Powers] is not only an accomplished digger of facts but someone who understands that in matters of war and politics there are very few good—or bad—guys.”
—St. Petersburg Times

“A compelling look into the politics and prejudices that shaped the era. . . . Evocative and evenhanded. . . . A rich and worthwhile read.”
—The Oregonian

“Packed with hundreds of memorable characters, sharply drawn . . . an incredible mix of life that few books or movies present as well as this book does. . . . This is a masterful book, an epic read. Powers has repaid the Indians he found compelling and mysterious as a kid 60 years ago with this marvelous, well-told tale.”
—The Washington Times

“Sophisticated and unsentimental. . . . [Powers] has crafted a masterful account of The Great Sioux Wars and solved a murder mystery.”
—Tulsa World

“[A] landmark history. . . . A well-balanced account of the clash of cultures and civilizations. . . . Powers brings the characters to life better than any previous author. . . . What Powers has so masterfully portrayed is the political bickering within the Sioux nation and the U.S. Army’s role in one of the most shameful episodes in American history.”
—Army Magazine

“There is a sustained feeling of excitement throughout the book, a sense of the historian’s hunt. . . . Powers is determined to untie the knots, to find out how Crazy Horse really died and why.”
—Los Angeles Times

“Tom Powers’s masterpiece, long awaited and very worth the wait. It’s one of the finest books yet written about the American West—dense with insight, filled with fascinating characters, including a fine portrait of the enigmatic warrior Crazy Horse. Anyone interested in the settlement of the West should hurry and buy it.”
—Larry McMurtry

“Tremendous. . . . The Killing of Crazy Horse is one of the most moving and compassionate books on the Indian Wars published in some time.”
—The American Scholar

“Never before has this story been told so masterfully.”
—True West Magazine

“Intricately structured and exhaustively researched, Thomas Powers’s powerful narrative thrashes its way through the thickets of the Big Horn and Yellowstone Expedition to solve the conundrum of the killing of Crazy Horse. By giving equal weight to the Indian narrative, Powers gives the story the complexity it deserves.”
—Ted Morgan, Pulitzer Prize-winning journalist and author of Wilderness at Dawn: The Settling of the North American Continent and A Shovel of Stars: The Making of the American West