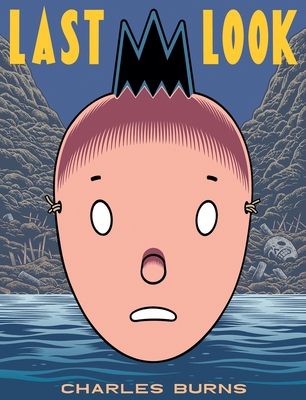 
Not On Our Shelves—Ships in 1-5 Days
A true graphic milestone: the epic trilogy that began with X'ed Out, continued in The Hive, and concluded in Sugar Skull—now in one volume.

The long strange trip of Doug in all its mind-bending, heartbreaking totality. The fragments of the past collide with the reality of the present, nightmarish dreams evolve into an even more dreadful reality, and when you finally find out where all of this has been going, and what it means . . . it will make you go right back to the first page and read it all again with new eyes. Just like Doug.

(With full-color illustrations throughout)
CHARLES BURNS grew up in Seattle in the 1970s. His work rose to prominence in Art Spiegelman's RAW magazine in the mid-1980s, and since then he has worked on a wide range of projects including album covers, ad campaigns, and set design. He has illustrated covers for Time, The New Yorker, and The New York Times Sunday Magazine, and is cover artist for The Believer. His full-length graphic novel, Black Hole received Eisner, Harvey, and Ignatz awards. He lives in Philadelphia with his wife and daughters.
“Through each work in this trilogy — “X’ed Out,” “The Hive” and “Sugar Skull” — Burns keeps us visually unnerved with surreal dreams meeting warped realities. The epic benefits from being collected here as a single set of inspired weirdness.” —The Washington Post

“This is a complex, multi-layered narrative with a classic unreliable protagonist…. Burns’ art is sensational. The images from Johnny’s story are genuinely disturbing on every level. As always, his characters tap into various archetypes of American youth and family life, but with a sinister edge showing darkness behind the American dream. Burns’ work is seductive, disquieting and original and if you don’t already have the separate volumes, this is a great chance to read the story for the first time.” —The Quietus

“Comic book writer and artist Charles Burns is master of the creepy, dislocated narrative…. It feels trite to bring up David Lynch comparisons when they're used to lend mystique to artists who have the slightest tickle of the strange, but in Burns' case a Lynch comparison seems accurate; his work shares much with the directors output, from the thickly inked 50s style, to the weird cyclical conversations and unforgiving penchant for a plot lurch.” —Ransom Note

“On one hand, you have the story of Doug, a young man who watched his father slowly die and takes that into all of his relationships and attempts at art. But the book also contains this story of Johnny 23, another young, naive man who ends up in an alien city and has to figure out how to survive….These two stories brilliantly align to create one cohesive narrative about something so simple as our search for happiness.” —Panel Patter

“As much grotesque fun as it was reading these books instalment by instalment, Last Look is absolutely the way it should be read. And re-read. And then read again.” —Book Munch