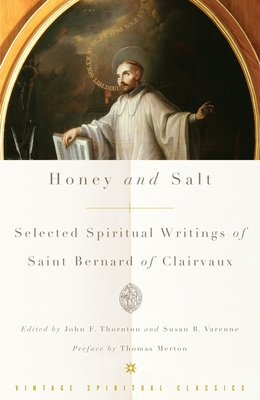 
Special Order—Subject to Availability
Bernard of Clairvaux, the twelfth-century monk who wrote that "Jesus is honey in the mouth, melody in the ear, a cry of joy in the heart," was both a mystic and a reformer. His writings reveal a mystical theology that Thomas Merton, a monastic heir to Bernard’s Cistercian reform, says "explains what it means to be united to God in Christ but (also) shows the meaning of the whole economy of our redemption in Christ." Critical of the monastic opulence of his times, Bernard exhorted his monks to consider that "Salt with hunger is seasoning enough for a man living soberly and wisely." Martin Luther believed that Bernard was "the best monk that ever lived, whom I admire beyond all the rest put together."

Bernard's zeal and charisma led to the reform of Christian life in medieval Europe. Today it is reported that Pope Benedict XVI keeps Bernard's treatise Advice to a Pope close at hand for spiritual support. Honey and Salt is an original selection for the general reader of Bernard’s sermons, treatises, and letters.
St. Bernard of Clairvaux (1090-1153) was born in Burgundy, France. He founded hundreds of monasteries and was canonized soon after his death.

John F. Thornton is a literary agent, former publishing execuitve, and the coeditor, with Katharine Washburn, of Dumbing Down (1996) and Tongues of Angels, Tongues of Men: A Book of Sermons (1999). He lives in New York City.

Susan B. Varenne is a New York City teacher with a strong avocational interest in and wide experience of spiritual literature. She holds an M.A. from the University of Chicago Divinity School and a Ph.D. from Columbia University.

James J. O’Donnell is a professor of classics and provost of Georgetown University. He has served as president of the American Philological Association and is a Fellow of the Medieval Academy of America. He has published widely on the cultural history of the late antique Mediterranean world. His most recent book is Augustine: A New Biography (2005).