Resurrection: The Struggle for a New Russia (Paperback) 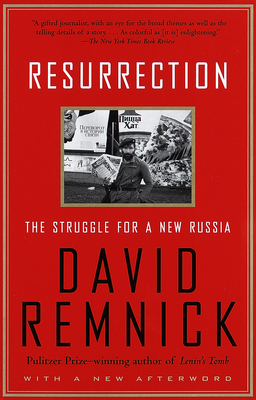 Resurrection: The Struggle for a New Russia (Paperback)


Not On Our Shelves—Ships in 1-5 Days
Pulitzer Prize-winning author David Remnick chronicles the new Russia that emerged from the ash heap of the Soviet Union. From the siege of Parliament to the farcically tilted elections of 1996, from the rubble of Grozny to the grandiose wealth and naked corruption of today's Moscow, Remnick chronicles a society so racked by change that its citizens must daily ask themselves who they are, where they belong, and what they believe in. Remnick composes this panorama out of dozens of finely realized individual portraits. Here is Mikhail Gorbachev, his head still swimming from his plunge from reverence to ridicule. Here is Vladimir Zhirinovsky, the half-Jewish anti-Semite who conducts politics as loony performance art. And here is Boris Yeltsin, the tottering populist who is not above stealing elections. In Resurrection, they become the players in a drama so vast and moving that it deserves comparison with the best reportage of George Orwell and Michael Herr.

"This is what happens when a good writer unleashes eye and ear on a story that moves with the speed of light. Resurrection has the feel of describing vast, historical change even as it is happening."--Chicago Tribune
DAVID REMNICK is the editor of The New Yorker. He began his career as a sportswriter for The Washington Post and won the Pulitzer Prize in 1994 for Lenin's Tomb. He is also the author of Resurrection and The Devil Problem and Other True Stories, a collection of essays. Mr. Remnick served as an Olympic Correspondent and Commentator for NBC during the Sochi 2014 Winter Olympics. He lives in New York City with his wife and three children.