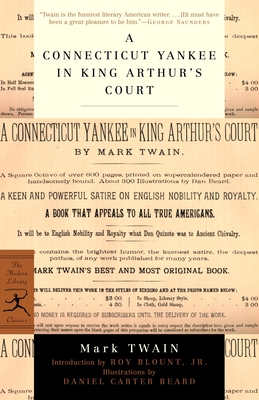 
On Our Shelves Now at:
Hank Morgan awakens one morning to find he has been transported from nineteenth-century New England to sixth-century England and the reign of King Arthur and the Knights of the Round Table. Morgan brings to King Arthur’s utopian court the ingenuity of the future, resulting in a culture clash that is at once satiric, anarchic, and darkly comic.

Critically deemed one of Twain’s finest and most caustic works, A Connecticut Yankee in King Arthur’s Court is both a delightfully entertaining story and a disturbing analysis of the efficacy of government, the benefits of progress, and the dissolution of social mores. It remains as powerful a work of fiction today as it was upon its first publication in 1889.

Mark Twain was born Samuel Langhorne Clemens on November 30, 1835, in Florida, Missouri; his family moved to the port town of Hannibal four years later. His father, an unsuccessful farmer, died when Twain was eleven. Soon afterward the boy began working as an apprentice printer, and by age sixteen he was writing newspaper sketches. He left Hannibal at eighteen to work as an itinerant printer in New York, Philadelphia, St. Louis, and Cincinnati. From 1857 to 1861 he worked on Mississippi steamboats, advancing from cub pilot to licensed pilot.

After river shipping was interrupted by the Civil War, Twain headed west with his brother Orion, who had been appointed secretary to the Nevada Territory. Settling in Carson City, he tried his luck at prospecting and wrote humorous pieces for a range of newspapers. Around this time he first began using the pseudonym Mark Twain, derived from a riverboat term. Relocating to San Francisco, he became a regular newspaper correspondent and a contributor to the literary magazine the Golden Era. He made a five-month journey to Hawaii in 1866 and the following year traveled to Europe to report on the first organized tourist cruise. The Celebrated Jumping Frog of Calaveras County and Other Sketches (1867) consolidated his growing reputation as humorist and lecturer.

After his marriage to Livy Langdon, Twain settled first in Buffalo, New York, and then for two decades in Hartfort, Connecticut. His European sketches were expanded into The Innocents Abroad (1869), followed by Roughing It (1872), an account of his Western adventures; both were enormously successful. Twain's literary triumphs were offset by often ill-advised business dealings (he sank thousands of dollars, for instance, in a failed attempt to develop a new kind of typesetting machine, and thousands more into his own ultimately unsuccessful publishing house) and unrestrained spending that left him in frequent financial difficulty, a pattern that was to persist throughout his life.

Following The Gilded Age (1873), written in collaboration with Charles Dudley Warner, Twain began a literary exploration of his childhood memories of the Mississippi, resulting in a trio of masterpieces--The Adventures of Tom Sawyer (1876), Life on the Mississippi (1883), and finally The Adventures of Huckleberry Finn (1885), on which he had been working for nearly a decade. Another vein, of historical romance, found expression in The Prince and the Pauper (1882), the satirical A Connecticut Yankee in King Arthur's Court (1889), and Personal Recollections of Joan of Arc (1896), while he continued to draw on his travel experiences in A Tramp Abroad (1880) and Following the Equator (1897). His close associates in these years included William Dean Howells, Bret Harte, and George Washington Cable, as well as the dying Ulysses S. Grant, whom Twain encouraged to complete his memoirs, published by Twain's publishing company in 1885.

For most of the 1890s Twain lived in Europe, as his life took a darker turn with the death of his daughter Susy in 1896 and the worsening illness of his daughter Jean. The tone of Twain's writing also turned progressively more bitter. The Tragedy of Pudd'nhead Wilson (1894), a detective story hinging on the consequences of slavery, was followed by powerful anti-imperialist and anticolonial statements such as 'To the Person Sitting in Darkness' (1901), 'The War Prayer' (1905), and 'King Leopold's Soliloquy' (1905), and by the pessimistic sketches collected in the privately published What Is Man? (1906). The unfinished novel The Mysterious Stranger was perhaps the most uncompromisingly dark of all Twain's later works. In his last years, his financial troubles finally resolved, Twain settled near Redding, Connecticut, and died in his mansion, Stormfield, on April 21, 1910.
"Twain is the funniest literary American writer. . . . [I]t must have been a great pleasure to be him."
--George Saunders