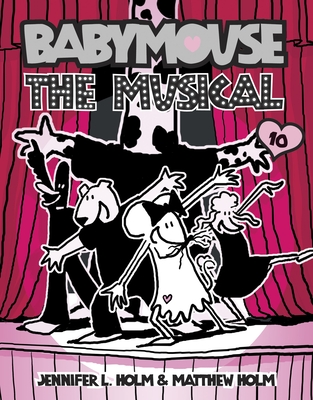 This is book number 10 in the Babymouse series.

Meet Babymouse--the spunky mouse beloved by young readers for more than a decade! Babymouse wants to get the lead in the school musical, but Felicia Furrypaws stands in her way. Will Babymouse and her friends get their chance in the spotlight? This groundbreaking young graphic novel series, full of humor and fun, is a bestseller that’s sold more than three million copies!

Dust off your dancing shoes! Babymouse and the gang are taking center stage in the feel-good book of the season! Will Babymouse get the lead in the school musical or will Felicia Furrypaws steal the show? Find out in The Musical—the 10th hilarious, action-packed installment of the beloved Babymouse graphic novel series!

DON'T MISS The BIG Adventures of Babymouse: Once Upon a Messy Whisker, the newest, brightest, and BIGGER THAN EVER graphic novel from BABYMOUSE!
Jennifer is the New York Times bestselling author of several highly acclaimed novels, including three Newbery Honor-winners, Our Only May Amelia, Penny from Heaven, and Turtle in Paradise. Matthew Holm is a graphic designer and freelance writer. He lives in Portland, Oregon.
Here's what people are saying about Babymouse!

"Nobody puts Babymouse in the corner!" —The Horn Book, Starred Review

"Cute, smart, sassy Babymouse is fun and funny, and this book, like its predecessors, will draw reluctant readers as well as Babymouse fans."—Booklist