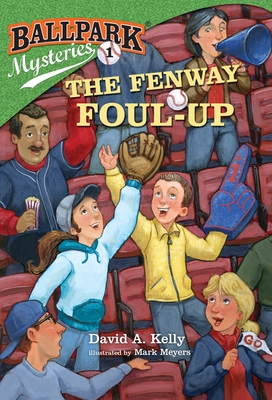 This is book number 1 in the Ballpark Mysteries series.

Now leading off the line-up—book #1 in a brand-new early chapter book mystery series where each book is set in a different American ballpark!

Thanks to Kate's mom, a sports reporter, cousins Mike Walsh and Kate Hopkins have tickets to the Red Sox game and All Access passes to Fenway Park. But as they're watching batting practice before the game, the lucky bat of Red Sox star slugger Big D is stolen . . . right in front of dozens of people. Without the bat, Big D can't seem to hit a thing. Can Kate and Mike figure out who pinched the bat before Big D and the Sox chalk up a loss?

Cross Ron Roy's mystery series with Matt Christopher's sports books and you get the Ballpark Mysteries: fun, puzzling whodunnits aimed right at beginning readers.
DAVID A. KELLY has written for many newspapers and magazines, and Babe Ruth and the Baseball Curse, published in spring 2009, was his first book for children. He lives 15 minutes from Fenway Park in Newton, Massachusetts, with his wife Alice; two sons, Steven and Scott; and a dog named Sam.

MARK MEYERS grew up in Utah and studied art in San Francisco at the Academy of Art University. This is his first project for Random House.

"Folding information about Fenway Park and its colorful history into the tale, Kelly also artfully slips in simple red herrings along with real clues to the thief’s identity and the bat’s whereabouts that sharper readers may pick up before the young detectives do...Leading off a formulaic series that will take Mike and Kate to baseball parks around the major leagues, this book should draw baseball fans as well as budding whodunit aficionados." - Booklist

"A new series for emerging chapter-book readers combines the allure of baseball parks with the challenge of solving a mystery...Historical details about Fenway Park, including the secret code found on the manual scoreboard, a look at Wally the mascot and a peek into the gift shop, will keep the young baseball fan reading." - Kirkus Reviews

"Kelly throws in plenty of behind-the-scenes Fenway Park trivia (both in the story and in an appendix) and keeps the story moving at a quick pace, which should easily hold baseball-lovers' attention." - Publisher's Weekly

"...should score with the series chapter-book gang, particularly kids who enjoy the blend of fiction and information that keeps the Magic Tree House thriving. There are a couple of sly misdirections to please beginner mystery readers, some Fenway-specific trivia to intrigue nonfiction readers, and the promise of the entire gamut of major-league baseball stadiums yet to visit for those continuing with the series. A scattering of black-and-white pictures and appended “Dugout Notes” extend the fun." - The Bulletin of the Center for Children's Books

"...Any 6- 9 year old baseball fan would step to the plate and devour this book like a box of Crackerjacks! Kelly intersperses the perfect mix of sports action, crime-solving and facts about Fenway Park." - Examiner.com