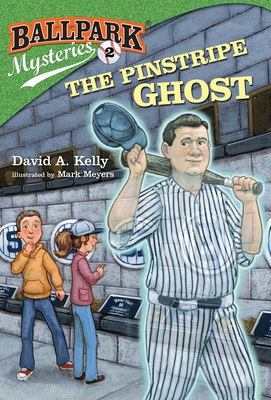 This is book number 2 in the Ballpark Mysteries series.

Batting second—and perfect for Halloween—book #2 in an early chapter book mystery series where each book is set in a different American ballpark!

Mike and Kate are waiting for Kate's mom at a boring press conference in Yankee Stadium when the team official says something that makes Mike perk up his ears. There are rumors that the ghost of Babe Ruth is haunting the new stadium! A chill air blasts down a service hallway before every home game, along with various thumps and bumps. Is the Bambino really searching for his missing locker?

Cross Ron Roy's mystery series with Matt Christopher's sports books and you get the Ballpark Mysteries: fun, puzzling whodunnits aimed right at beginning readers.
DAVID A. KELLY has written for many newspapers and magazines, and Babe Ruth and the Baseball Curse, published in spring 2009, was his first book for children. He lives 15 minutes from Fenway Park in Newton, Massachusetts, with his wife Alice; two sons, Steven and Scott; and a dog named Sam.

MARK MEYERS grew up in Utah and studied art in San Francisco at the Academy of Art University. This is his first project for Random House.