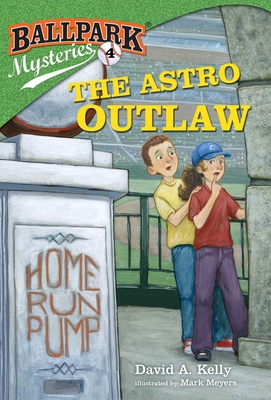 This is book number 4 in the Ballpark Mysteries series.

Now batting clean-up—book #4 in a new early chapter book mystery series where each book is set in a different American ballpark!

Houston, we have a problem! Before a game at the Astros' ballpark, Mike and Kate get to meet astronaut commander Nick Rice at the nearby Houston Space Center. He's planning to display a very rare moonrock at an autographing event later. But just before the event, a nefarious outlaw knocks out the commander and steals the moonrock! Can Mike and Kate figure out who did it . . . when their only clue is a broken green feather?

The Astro Outlaw includes a fun act page about the Houston Astros' stadium with trivia about the train on the outfield wall and the homerun gas pump.

Cross Ron Roy's A to Z Mystery series with Matt Christopher's sports books and you get the Ballpark Mysteries: fun, puzzling whodunnits aimed at the younger brothers and sisters of John Feinstein's fans.
DAVID A. KELLY has written for many newspapers and magazines, and Babe Ruth and the Baseball Curse, published in spring 2009, was his first book for children. He lives 15 minutes from Fenway Park in Newton, Massachusetts, with his wife, Alice; two sons, Steven and Scott; and a dog named Sam.

MARK MEYERS grew up in Utah and studied art in San Francisco at the Academy of Art University.