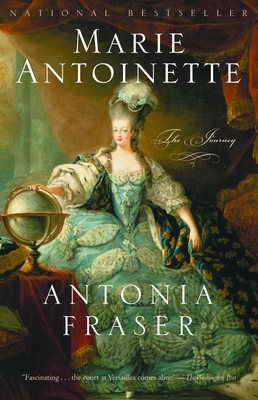 
Not On Our Shelves—Ships in 1-5 Days
The national bestseller from the acclaimed author of The Wives of Henry VIII.  France’s beleaguered queen, Marie Antoinette, wrongly accused of uttering the infamous “Let them eat cake,” was the subject of ridicule and curiosity even before her death; she has since been the object of debate and speculation and the fascination so often accorded tragic figures in history. Married in mere girlhood, this essentially lighthearted, privileged, but otherwise unremarkable child was thrust into an unparalleled time and place, and was commanded by circumstance to play a significant role in history. Antonia Fraser’s lavish and engaging portrait of Marie Antoinette, one of the most recognizable women in European history, excites compassion and regard for all aspects of her subject, immersing the reader not only in the coming-of-age of a graceful woman, buaimedt also in the unraveling of an era.

Antonia Fraser is the author of many internationally bestselling historical works, including Love and Louis XIV, Marie Antoinette, which was made into a film by Sofia Coppola, The Wives of Henry VIII, Mary Queen of Scots, Faith and Treason: The Story of the Gunpowder Plot, and Perilous Question: Reform or Revolution? Britain on the Brink, 1832. She is also the author of Must You Go? My Life with Harold Pinter. She has received the Wolfson Prize for History, the 2000 Norton Medlicott Medal of Britain’s Historical Association, and the Franco-British Society’s Enid McLeod Literary Prize. She was made a Dame of the British Empire for services to Literature in 2011

“Fascinating . . . the court at Versailles comes alive.” –The Washington Post

“Absorbing as ever. Fraser’s blend of insight and research persuade us that this unfortunate queen deserves neither the vilification nor the idealization she has received.” –The New Yorker