How to Be Parisian Wherever You Are: Love, Style, and Bad Habits (Hardcover) 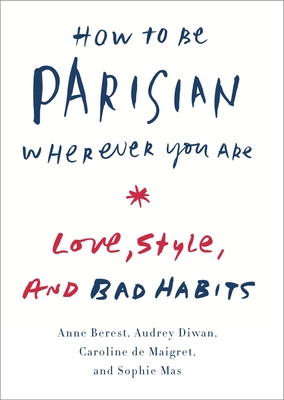 How to Be Parisian Wherever You Are: Love, Style, and Bad Habits (Hardcover)

From four stunning and accomplished French women—a charming bestseller about how to slip into your inner cool and be a Parisienne.

In short, frisky sections, these Parisian women give you their very original views on style, beauty, culture, attitude and men. The authors—Anne Berest, Audrey Diwan, Caroline de Maigret, and Sophie Mas—unmarried but attached, with children—have been friends for years. Talented bohemian iconoclasts with careers in the worlds of music, film, fashion and publishing, they are untypically frank and outspoken as they debunk the myths about what it means to be a French woman today. Letting you in on their secrets and flaws, they also make fun of their complicated, often contradictory feelings and behavior. They admit to being snobs, a bit self-centered, unpredictable but not unreliable. Bossy and opinionated, they are also tender and romantic.

You will be taken on a first date, to a party, to some favorite haunts in Paris, to the countryside, and to one of their dinners at home with recipes even you could do -- but to be out with them is to be in for some mischief and surprises. They will tell you how to be mysterious and sensual, look natural, make your boyfriend jealous, and how they feel about children, weddings and going to the gym. And they will share their address book in Paris for where to go: At the End of the Night, for A Birthday, for a Smart Date, A Hangover, for Vintage Finds and much more.

ANNE BEREST is the author of two novels and a biography of Françoise Sagan published this year; she also writes for television, cinema, and theater.

AUDREY DIWAN became a scriptwriter after studying journalism and political science. She wrote the screenplay for Cédric Jimenez’s La French, with Jean Dujardin, and is now directing her first feature film; she is also editor-at-large for the magazine Stylist.

CAROLINE DE MAIGRET studied literature at the Sorbonne before moving to New York to model. She returned to Paris in 2006 to found her music label. De Maigret has been an ambassador for Chanel since 2012, and supports women worldwide through the NGO Care.

SOPHIE MAS was born and raised in Paris. After graduating from Sciences Po and HEC, she started her own film company and now works as a producer in Los Angeles, New York and São Paulo.

“Four whip-smart, successful French women poke fun at the stereotypes of the 'Parisienne' and give genuine beauty and lifestyle tips, recipes, and fashion dos and don’ts ... De Maigret’s photography and a witty, wise, often tongue-in-cheek delivery puts the reader on a sure path to achieving the French femme’s je ne sais quoi.”
—Publishers Weekly

“You don’t have to be French to be a Parisian.“
—Karl Lagerfeld

“Very, very funny. While reading, I actually felt chicer, wittier and très Parisienne. I was laughing out loud by the end.”
—Plum Sykes, New York Times bestselling author of author of Bergdorf Blondes and The Debutante Divorcée