Stampede: Gold Fever and Disaster in the Klondike (Hardcover) 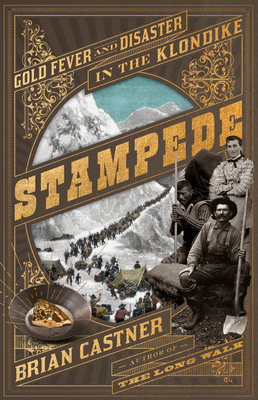 Stampede: Gold Fever and Disaster in the Klondike (Hardcover)


Not On Our Shelves—Ships in 1-5 Days
A gripping and wholly original account of the epic human tragedy that was the great Klondike Gold Rush of 1897-98. One hundred thousand men and women rushed heedlessly north to make their fortunes; very few did, but many thousands of them died in the attempt.

In 1897, the United States was mired in the worst economic depression that the country had yet endured. So when all the newspapers announced gold was to be found in wildly enriching quantities at the Klondike River region of the Yukon, a mob of economically desperate Americans swarmed north. Within weeks tens of thousands of them were embarking from western ports to throw themselves at some of the harshest terrain on the planet--in winter yet--woefully unprepared, with no experience at all in mining or mountaineering. It was a mass delusion that quickly proved deadly: avalanches, shipwrecks, starvation, murder.

Upon this stage, author Brian Castner tells a relentlessly driving story of the gold rush through the individual experiences of the iconic characters who endured it. A young Jack London, who would make his fortune but not in gold. Colonel Samuel Steele, who tried to save the stampeders from themselves. The notorious gangster Soapy Smith, goodtime girls and desperate miners, Skookum Jim, and the hotel entrepreneur Belinda Mulrooney. The unvarnished tale of this mass migration is always striking, revealing the amazing truth of what people will do for a chance to be rich.
BRIAN CASTNER is the author of Disappointment River, All the Ways We Kill and Die, and the war memoir The Long Walk, which was adapted into an opera. A former Explosive Ordnance Disposal officer and veteran of the Iraq War, his journalism and essays have appeared in the New York Times, Wired, Esquire, and on NPR. He is a two-time grantee of the Pulitzer Center, and is the co-editor of The Road Ahead: Stories from the Forever War.
"Harrowing. . .Castner brings to life the the last of the great 19th-century North American gold rushes, featuring a cast of characters both illustrious (Jack London, who returned from the Klondike wealthy only in grist for his stories) and infamous (Frederick Trump, grandfather of the former president, who operated a restaurant and brothel) . .[He's] an engrossing writer. . .skillfull in conjuring the social world of the Klondike. . .Mr. Castner’s larger point—that the romantic myth of the frontier continues to obscure the human costs of its absorption and exploitation—shines as brightly as a gold nugget in a mountain stream." --Andrew R. Graybill, The Wall Street Journal

"A riveting tale told with panache and discernment. Castner brings to throbbing life the thousand days of the Klondike rush, and leaves the reader breathless yet edified." --H. W. Brands, author of The Zealot and the Emancipator and finalist for the Pulitzer Prize

"Compelling. . .Like Timothy Egan did for the Dust Bowl in The Worst Hard Time, Castner combines oral histories, memoirs, and research to vividly evoke the Yukon Gold Rush through people and nature. . .Readers who enjoy history, adventure, and nature writing, and fans of Egan, Candice Millard, and Jack London, will savor this page-turner.” --Library Journal

“Brian Castner’s Stampede is a masterful narrative history—deeply researched, beautifully written, and utterly compelling. Novelistic in the best sense, with vivid characters and carefully reconstructed scenes of life among the prospectors, this book is an endlessly fascinating joy to read.” --Phil Klay, author of Missionaries and winner of the National Book Award

"A tangy tale of the 19th century’s last, storied gold rush, timed for its 125th anniversary. . .There’s a lot of swagger and a lot of swishing skirts in Castner’s pages, rife with entertaining accounts of all seven deadly sins. . .A vigorous historical page-turner packed with a cast of decidedly colorful (and off-color) actors." --Kirkus Reviews

"This is a story to get lost inside of, a line in the history books brought brilliantly to life. Brian Castner skillfully unwinds the true tale behind the Klondike myth, a moment of collective madness populated by a cast of seekers, hucksters, thieves, and ice-hardened men and women. Stampede is a dazzling tale of greed and resilience, and the gap between promises of endless riches and a reality of bitter struggle." --Evan Ratliff, author of The Mastermind

"Stampede is a much-needed historical restorative on the true nature of the Klondike Gold Rush. But it is also a timely and vivid account of an encounter between American hubris and the Alaska Factor that ended disastrously, and a reminder of the respect this place deserves." --Matthew Komatsu, Alaskan search and rescue, and Alaska Literary Award winner

"[An] exhilarating account. . .Rich in history, colorful frontier characters, vivid details, and narrative drive, Stampede depicts people in the throes of gold fever and the extreme, frequently calamitous, lengths to which they went in search of wealth." --The Christian Science Monitor

"Brian Castner has written a gusher of a story, a fast-paced retelling of the saga of gold-rush psychosis for a new generation--with plenty of the good bits, and new discoveries of his own.” --Tom Kizzia, author of the New York Times bestseller Pilgrim’s Wilderness and The Wake of the Unseen Object

"A ripping tale of ambition, adventure, insanity and greed. Brian Castner tells a big American story of the last big American frontier. I couldn't put this book down." --Elliot Ackerman, author of Red Dress in Black and White and finalist for the National Book Award

"Brian Castner combines taut prose and vivid scene setting to deliver a gripping narrative about a formative yet largely forgotten period in American history. With appearances by Jack London, Frederick Trump and a lengthy cast of lively characters, Stampede kept me up late, night after night, unable to stop turning the pages." --Clay Risen, author of the Crowded Hour

“A freight-train of a story that thunders along with all the energy of the tumultuous events it conjures. Sharply told from historical sources, Stampede is a saga of need, greed, and shattered fantasies, and the dark side of the American Dream.” --Caroline Alexander, New York Times bestselling author of The Bounty and finalist for the National Book Critics Circle Award