Urban Jungle: The History and Future of Nature in the City (Hardcover) 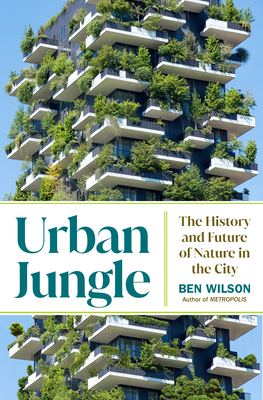 Urban Jungle: The History and Future of Nature in the City (Hardcover)


Coming Soon—Pre-Order Now
In this exhilarating look at cities, past and future, Ben Wilson proposes that, in our world of rising seas and threatening weather, the natural world may prove the city's savior.

Since the beginning of civilization, humans have built cities to wall nature out, then glorified it in beloved but quite artificial parks. In Urban Jungle Ben Wilson—the author of Metropolis, a seven-thousand-year history of cities that the Wall Street Journal called “a towering achievement”—looks to the fraught relationship between nature and the city for clues to how the planet can survive in an age of climate crisis.

Whether it was the market farmers of Paris, Germans in medieval forest cities, or the Aztecs in the floating city of Tenochtitlan, pre-modern humans had an essential bond with nature. But when the day came that water was piped in and food flown from distant fields, that relationship was lost. Today, urban areas are the fastest-growing habitat on Earth and in Urban Jungle Ben Wilson finds that we are at last acknowledging that human engineering is not enough to protect us from extremes of weather. He takes us to places where efforts to rewild the city are under way: to Los Angeles, where the city’s concrete river will run blue again, to New York City, where a bleak landfill will be a vast grassland preserve. The pinnacle of this strategy will be Amsterdam: a city that is its own ecosystem, that makes no waste and produces its own energy. In many cities, Wilson finds, nature is already thriving. Koalas are settling in Brisbane, wild boar may raid your picnic in Berlin. Green canopies, wildflowers, wildlife: the things that will help cities survive, he notes, also make people happy.

Urban Jungle offers the pleasures of history—how backyard gardens spread exotic species all over the world, how war produces biodiversity—alongside a fantastic vision of the lush green cities of our future. Climate change, Ben Wilson believes, is only the latest chapter in the dramatic human story of nature and the city.
BEN WILSON has an undergraduate and master's degree in history from Cambridge. He is the author of six previous books, including Metropolis, What Price Liberty?; for which he received the Somerset Maugham Award; and the Sunday Times bestseller Empire of the Deep: The Rise and Fall of the British Navy.
"[A] thorough exploration of urban ecology. . . [Wilson] makes a convincing case that the natural world extends farther than commonly acknowledged, and the trivia is delightful. . . Stimulating and wide-ranging, [Urban Jungle] will change how city dwellers view their relationship with nature."
—Publishers Weekly

"Wilson is a helpful guide to the intersection of nature and city life. . . A sharp, dispassionate plea to recognize our dependence on nature and mitigate the dire consequences of climate change."
—Kirkus Reviews