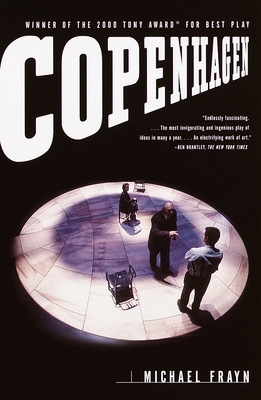 “Endlessly fascinating…. The most invigorating and ingenious play of ideas in many a year….  An electrifying work of art.” —Ben Brantley, The New York Times

In 1941 the German physicist Werner Heisenberg made a clandestine trip to Copenhagen to see his Danish counterpart and friend Niels Bohr. Their work together on quantum mechanics and the uncertainty principle had revolutionized atomic physics. But now the world had changed and the two men were on opposite sides in a world war. Why Heisenberg went to Copenhagen and what he wanted to say to Bohr are questions that have vexed historians ever since. In Michael Frayn’s ambitious, fiercely intelligent, and daring new play Heisenberg and Bohr meet once again to discuss the intricacies of physics and to ponder the metaphysical—the very essence of human motivation.
MICHAEL FRAYN has written plays, novels, and screenplays, in additioin to being a journalist, documentary filmmaker, and translator of Chekhov. His thirteen plays include Copenhagen, which was awarded the Tony Award for Best Play, as well as the Outer Critics Circle and Drama Desk awards and, in the United Kingdom, the Olivier and Evening Standard awards. His novel Headlong was shortlisted for the Booker Prize. His most recent novel, Spies, was published in 2002. Born in London in 1933 and educated at Cambridge, Frayn is married to the biographer and critic Claire Tomalin; they live in London.
“Endlessly fascinating…. The most invigorating and ingenious play of ideas in many a year….  An electrifying work of art.” —Ben Brantley, The New York Times

“Superbly dramatized…. [Frayn] has an elegant, almost algebraic way with the structure of a play…. Copenhagen offers a particular kind of brain-teasing pleasure.” —John Lahr, The New Yorker