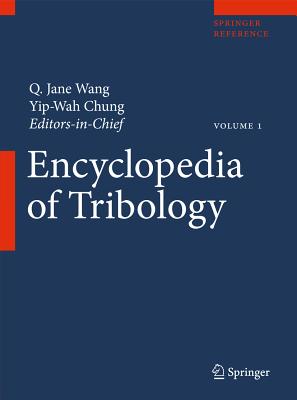 TRIBOLOGY - the study of friction, wear and lubrication - impacts almost every aspect of our daily lives. The Springer Encyclopedia of Tribology is an authoritative and comprehensive reference covering all major aspects of the science and engineering of tribology that are relevant to researchers across all engineering industries and related scientific disciplines. This is the first major reference that brings together the science, engineering and technological aspects of tribology of this breadth and scope in a single work. Developed and written by leading experts in the field, the Springer Encyclopedia of Tribology covers the fundamentals as well as advanced applications across material types, different length and time scales, and encompassing various engineering applications and technologies. Exciting new areas such as nanotribology, tribochemistry and biotribology have also been included. As a six-volume set, the Springer Encyclopedia of Tribology comprises 1630 entries written by authoritative experts in each subject area, under the guidance of an international panel of key researchers from academia, national laboratories and industry. With alphabetically-arranged entries, concept diagrams and cross-linking features, this comprehensive work provides easy access to essential information for both researchers and practicing engineers in the fields of engineering (aerospace, automotive, biomedical, chemical, electrical, and mechanical) as well as materials science, physics, and chemistry.

Jane Wang Qian JaneWang received her PhD (Mechanical Engineering) from Northwestern University, USA in 1993. She taught at Florida International University in Miami for about five years before joining Northwestern in 1998 as an Associate Professor. She is now a Professor in the Mechanical Engineering Department at Northwestern and an Adjunct Professor in the State Key Laboratory of Mechanical Transmission at Chongqing University, China. ProfessorWang served Northwestern'sMechanical Engineering as Director of the Graduate Studies Committee from 2003 to 2007 and Adviser of the American Society ofMechanical Engineers (ASME) Student Chapter from 1998 to 2003. She was a Board of Director of Society of Tribologists and Lubrication Engineers (STLE), 2008-2009, Chair of the 2011 ASME/STLE International Joint Tribology Conference, Chair of the STLE Annual Meeting Program Committee, 2007-2008, Secretary of the 2005 Word Tribology Congress Technical Program Committee, and a member of the Organization Committee of the 2007 International Symposium on Computational Mechanics. Professor Wang was named Fellow of ASME and STLE. She is one of the awardees of STLE's Surface Engineering Technical Committee Best Paper Award, 2011, Edmond E Bisson Best Written Contribution Award, 2010, and Captain Alfred E. Hunt Best Paper Award, 1997. She received a CAREER Award from US National Science Foundation, 1997, and a Ralph R. Teeter Educational Award from Society of Automotive Engineers (SAE), 2000. She was named Journal of Tribology Reviewer of the Year, 1998.Yip-Wah ChungYip-Wah Chung obtained his BS (Physics and Mathematics) and MPhil (Physics) degrees from the University of Hong Kong. He then went to California and obtained his PhD (Physics) from the University of California at Berkeley in 1977. Immediately after completing his PhD study, he joined the Department of Materials Science and Engineering at Northwestern University. He served as Director of the Center for Engineering Tribology at Northwestern from 1987 to 1992, as Department Chair from 1992 to 1998, and as program officer in surface engineering and materials design in the Civil andMechanical Systems Division at the National Science Foundation. He has served many years on the Hong Kong Research Grants Council and is currently a member of the Hong Kong University Grants Committee. He has published 200 papers in surface science, thin films, tribology, and alloy design, two textbooks (Practical Guide to Surface Science and Spectroscopy, Introduction to Materials Science and Engineering), and one monograph (Micro- and Nanoscale Phenomena in Tribology). Prof. Chung was named Fellow, ASM International; Fellow, AVS; and Fellow, Society of Tribologists and Lubrication Engineers. His other awards include Teacher of the Year in Materials Science, Innovative Research Award and Best Paper Awards from the ASME Tribology Division, Technical Achievement Award from the National Storage Industry Consortium, Bronze Bauhinia Star Medal from the Hong Kong Special Administrative Region Government, and Advisory Professor from Fudan University.