A History of Non-Euclidean Geometry: Evolution of the Concept of a Geometric Space (Studies in the History of Mathematics and Physical Sciences #12) (Hardcover) 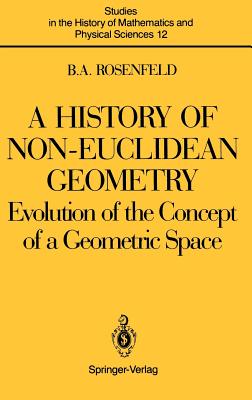 A History of Non-Euclidean Geometry: Evolution of the Concept of a Geometric Space (Studies in the History of Mathematics and Physical Sciences #12) (Hardcover)

By Abe Shenitzer (Translator), Boris A. Rosenfeld, Hardy Grant (Other)


Not On Our Shelves—Ships in 1-5 Days
(This book cannot be returned.)
The Russian edition of this book appeared in 1976 on the hundred-and-fiftieth anniversary of the historic day of February 23, 1826, when LobaeevskiI delivered his famous lecture on his discovery of non-Euclidean geometry. The importance of the discovery of non-Euclidean geometry goes far beyond the limits of geometry itself. It is safe to say that it was a turning point in the history of all mathematics. The scientific revolution of the seventeenth century marked the transition from mathematics of constant magnitudes to mathematics of variable magnitudes. During the seventies of the last century there occurred another scientific revolution. By that time mathematicians had become familiar with the ideas of non-Euclidean geometry and the algebraic ideas of group and field (all of which appeared at about the same time), and the (later) ideas of set theory. This gave rise to many geometries in addition to the Euclidean geometry previously regarded as the only conceivable possibility, to the arithmetics and algebras of many groups and fields in addition to the arith- metic and algebra of real and complex numbers, and, finally, to new mathe- matical systems, i. e., sets furnished with various structures having no classical analogues. Thus in the 1870's there began a new mathematical era usually called, until the middle of the twentieth century, the era of modern mathe- matics.