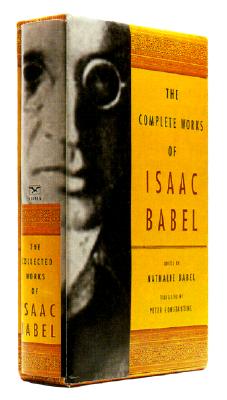 A literary event of extraordinary dimensions—the first single-volume edition of all of Isaac Babel's work.

Considered one of the greatest writers of the twentieth century—and the most revered short-story writer since Chekhov—Isaac Babel (1894-1940) left an extraordinary literary legacy that continues to grow, remarkably, more than sixty years after his death in Lubyanka Prison at the hands of Stalin's secret police. Despite Babel's celebrated stature—which had already been achieved during his lifetime—the whole of his work, owing to his arrest and the state of affairs in the Soviet Union, was never assembled in one place.

This magnificent edition of Babel's collected work fulfills a lifelong ambition of Babel's daughter, Nathalie, who has authorized and edited the entire collection, and has collaborated with award-winning translator Peter Constantine in readying the work for publication. Every story or selection included in this volume (147 in total) has been newly edited and translated, beginning with Babel's first published story, "Old Shloyme," originally published in 1913, and concluding with two scenes from a screenplay that Babel did not live to see made into a film. Included in The Complete Works are stories that will be familiar to Babel enthusiasts, like the "Red Cavalry" cycle and his diaries, as well as untranslated stories and other works that appear in English for the first time.

To read Babel is to relive the wild and often terrifying swings of twentieth-century Russian history. No writer has conveyed with such emotion and convulsive energy the tragic story of a modern nation that remained a prisoner of its brutal and repressive past. Combining the compassion of Dostoevsky with the mordant wit of Chekhov, Babel injected a daring social criticism and a palpable sexual tension into the literary climate of post-tsarist Russia. In the process, he created a style so vivid, so lacerating, and so utterly hypnotic that his stories have come to define the sanguinary landscape of the Soviet Union in the years between the two world wars.

As these stories illustrate, and as Cynthia Ozick insightfully observes in her passionate introduction, Babel was a man of acute contradictions. Born in the cosmopolitan port city of Odessa during the long reign of Alexander II, Babel was quite competent in both Hebrew and Yiddish but, influenced by both Flaubert and Maupassant, wrote his first stories in fluent French. His often comic portrayal of characters—such as the ruthless Jewish mobsters depicted in his Benya Krik stories—resulted from observing them firsthand as a boy in the Moldavanka neighborhood of Odessa. As Ozick notes, the "breadth and scope of his social compass enabled him to see through the eyes of peasants, soldiers, priests, rabbis, children, artists, actors, women of all classes. . . . He was at once a poet of the city ('the glass sun of Petersburg') and a lyricist of the countryside ('the walls of sunset collapsing into the sky')."

Arranged sequentially in fourteen sections, The Complete Works traces the entire arc of Babel's literary career, beginning with early stories, which are followed by The Odessa Stories and The Red Cavalry Stories. Also included are his Reports from St. Petersburg (1918), the remarkable 1920 Diary, and reports from Soviet Georgia and France, where his wife, Evgenia, and his daughter, Nathalie, lived. Many of his later stories (1925-38) reflect a compelling literary quality and abrupt change in style that have challenged translators for years. An accomplished playwright and screenwriter, Babel, at the height of his popularity, began writing for the Soviet cinema as early as the 1920s, and many of these works have never been translated before. This edition also includes a foreword and a biographical afterword by Nathalie Babel, a translator's preface and annotations throughout by Peter Constantine, and a chronology by Gregory Freidin, regarded as one of the foremost Babel scholars in the world.

Unprecedented for both its literary and its scholarly achievement, The Complete Works of Isaac Babel will stand as Babel's final, most enduring legacy.

Isaac Babel was a journalist, playwright, and short story writer, whose works include the Russian masterpieces Red Cavalry and The Odessa Tales. He was arrested and executed in a Soviet prison in 1940.

Nathalie Babel, his daughter, edited two other books of Babel's writing and is the author of Hugo and Dostoevsky.

Peter Constantine is the director of the Program in Literary Translation at the University of Connecticut, the publisher of World Poetry Books, and editor-in-chief of the magazine New Poetry in Translation. A prolific translator from several modern and classical languages, Constantine was awarded the PEN Translation Prize for Six Early Stories by Thomas Mann, the National Translation Award for The Undiscovered Chekhov, the Helen and Kurt Wolff Translator’s Prize for his translation of The Bird Is a Raven by Benjamin Lebert, and the Koret Jewish Book Award and a National Jewish Book Award citation for The Complete Works of Isaac Babel.
Babel is altogether the artist, drawing the reader completely into a new view of the world.
— Alfred Kazin - New York Review of Books

A talent of great energy and boldness.
— Lionel Trilling