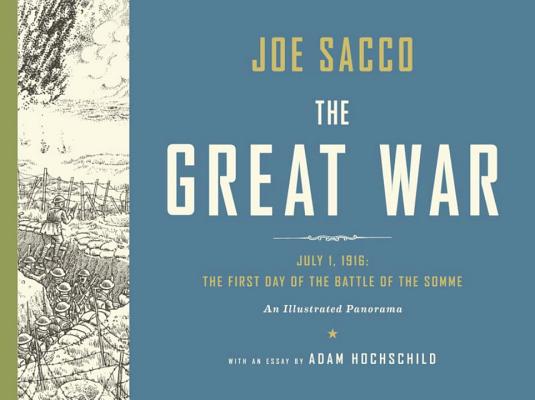 From “the heir to R. Crumb and Art Spiegelman” (Economist) comes a monumental, wordless depiction of the most infamous day of World War I.

Launched on July 1, 1916, the Battle of the Somme has come to epitomize the madness of the First World War. Almost 20,000 British soldiers were killed and another 40,000 were wounded that first day, and there were more than one million casualties by the time the offensive halted. In The Great War, acclaimed cartoon journalist Joe Sacco depicts the events of that day in an extraordinary, 24-foot- long panorama: from General Douglas Haig and the massive artillery positions behind the trench lines to the legions of soldiers going “over the top” and getting cut down in no-man’s-land, to the tens of thousands of wounded soldiers retreating and the dead being buried en masse. Printed on fine accordion-fold paper and packaged in a deluxe slipcase with a 16-page booklet, The Great War is a landmark in Sacco’s illustrious career and allows us to see the War to End All Wars as we’ve never seen it before.

Joe Sacco's acclaimed books include Palestine, Safe Area Gorazde, and Footnotes in Gaza, as well as a best-selling collaboration with Chris Hedges, Days of Destruction, Days of Revolt. He lives in Portland, Oregon.
A searing depiction of a single day…. Exacting in every damning detail, magnificent in its tragic way.
— Jeff Shesol - New York Times Book Review

Show[s] what photos can’t: the enormousness and the enormity of what happened that day on the Western Front.
— Douglas Wolk - Washington Post

You’ve never seen anything quite like this.
— The Seattle Stranger

This is incredible. It is fantastic. He’s showing you far more than a film or photographs could. It’s just drawing—it’s a superb example of what art can do.
— David Hockney - Sunday Times

Insanely beautiful. This is yet another total masterpiece from one of the most important comic artists of all time.
— Stuart Hammond - Dazed & Confused