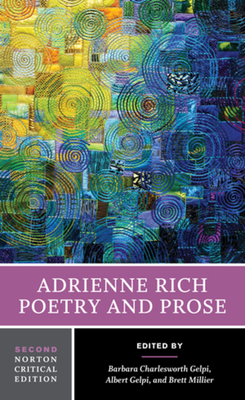 “This absolutely exquisite selection of a major poet’s best poetry is a tribute to both her and the editors as well as a deep service to literate humanity.” —ALBERT WACHTEL, Pitzer College

“I do use your edition of Rich each time I teach my women writers course. It’s essential!” —JOELLEN DELUCIA, Central Michigan University

• Generous selections of poetry and prose from the entire oeuvre of one of America’s most influential poets.

• Fifteen reviews and critical commentaries, nine of them new to the Second Edition, carefully chosen as a guide to Adrienne Rich’s poetics—and to her poetics as related to politics—ranging from W. H. Auden’s 1951 response to her first book to critics’ reviews of the magisterial Collected Poems in 2016.

• A Chronology, a Selected Bibliography, and an Index.

Read by more than 12 million students over fifty-five years, Norton Critical Editions set the standard for apparatus that is right for undergraduate readers. The three-part format—annotated text, contexts, and criticism—helps students to better understand, analyze, and appreciate the literature, while opening a wide range of teaching possibilities for instructors. Whether in print or in digital format, Norton Critical Editions provide all the resources students need.

Adrienne Rich (1929–2012) was an award-winning poet, influential essayist, radical feminist, and major public intellectual of the twentieth and twenty-first centuries. She wrote two dozen volumes of poetry, including the National Book Award–winning Diving into the Wreck, and more than a half-dozen of prose.

Barbara Charlesworth Gelpi is Professor of English at Stanford University, where she has taught since 1968. She is the author of Shelleyís Goddess: Maternity, Language, Subjectivity and Dark Passages: The Decadent Consciousness in Victorian Literature, as well as numerous articles on, mainly, feminist and psychological literature. She is an editor of several important volumes, including Feminist Theory: A Critique of Ideologies and Women and Poverty.

Albert Gelpi is William Robertson Coe Professor of American Literature at Stanford University, where he has also taught since 1968. His books include Emily Dickinson: The Mind of the Poet, The Tenth Muse: The Psyche of the American Poet, and, most recently, A Coherent Splendor: The American Poetic Renaissance, 1910-1950. He is the editor of Wallace Stevens: The Poetics of Modernism and Denise Levertov: Selected Criticism and for a decade edited Cambridge Studies in American Literature and Culture.

Brett C. Millier is the Reginald L. Cook Professor of American Literature at Middlebury College. She is the author of Elizabeth Bishop: Life and the Memory of It, and Flawed Light: American Women Poets and Alcohol. She is also associate editor of The Columbia History of American Poetry.