Report From a Parisian Paradise: Essays from France, 1925-1939 (Paperback) 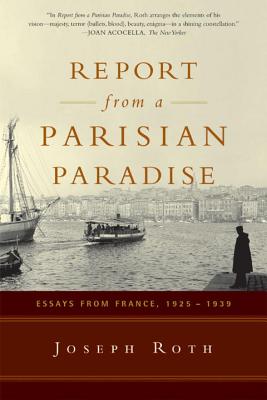 Report From a Parisian Paradise: Essays from France, 1925-1939 (Paperback)

The wisdom of a lost generation distilled in a bottle of Calvados.

At one time an underground hero in the world of journalism, with prose on a par with Tolstoy and Kafka, Joseph Roth now looms large in the pantheon of European literature. Indeed, the last five years have seen a major Roth revival culminating in Report from a Parisian Paradise, a haunting epitaph by the greatest foreign correspondent of his age. An exile in Paris, Roth captured the essence of France in the 1920s and 1930s. From the port town of Marseille to the erotic hill country around Avignon, Report from a Parisian Paradise—superbly translated by Michael Hofmann—paints the sepia-tinted landscapes, enchanting people, and ruthless desperation of a country hurtling toward dissolution. Roth's book is not only a paean to a European order that could no longer hold but also a miraculous and revelatory work of transcendent philosophical clarity.

Joseph Roth (1894-1939) was the great elegist of the cosmopolitan culture that flourished in the dying days of the Austro-Hungarian Empire. He published several books and articles before his untimely death at the age of 44. Roth’s writing has been admired by J. M. Coetzee, Jeffrey Eugenides, Elie Wiesel, and Nadine Gordimer, among many others.

The poet Michael Hofmann has won numerous prizes for his German translations.

The poet Michael Hofmann has won numerous prizes for his German translations.