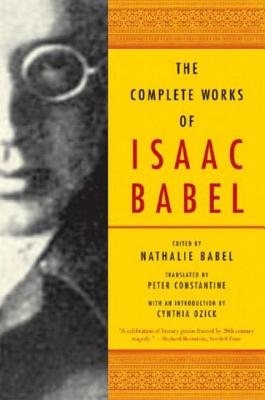 Finally in paperback, this "monumental collection; gathers all of Babel's deft and brutal writing, including a wide array of previously unavailable material, from never-before-translated stories to plays and film scripts" (David Ulin, Los Angeles Times). Reviewing the work in The New Republic, James Woods wrote that this groundbreaking volume "represents a triumph of translating, editing, and publishing. Beautiful to hold, scholarly and also popularly accessible, it is an enactment of love." Considered one of the greatest writers of the twentieth century, Isaac Babel has left his mark on a generation of readers and writers. This book will stand as Babel's final, most enduring legacy. Winner of the Koret Jewish Book Award; A New York Times Notable Book, a and Library Journal Best Book, a Washington Post Book World Rave, a Village Voice Favorite Book of the Year.

Isaac Babel was a journalist, playwright, and short story writer, whose works include the Russian masterpieces Red Cavalry and The Odessa Tales. He was arrested and executed in a Soviet prison in 1940.

Nathalie Babel, his daughter, edited two other books of Babel's writing and is the author of Hugo and Dostoevsky.

Peter Constantine is the director of the Program in Literary Translation at the University of Connecticut, the publisher of World Poetry Books, and editor-in-chief of the magazine New Poetry in Translation. A prolific translator from several modern and classical languages, Constantine was awarded the PEN Translation Prize for Six Early Stories by Thomas Mann, the National Translation Award for The Undiscovered Chekhov, the Helen and Kurt Wolff Translator’s Prize for his translation of The Bird Is a Raven by Benjamin Lebert, and the Koret Jewish Book Award and a National Jewish Book Award citation for The Complete Works of Isaac Babel.