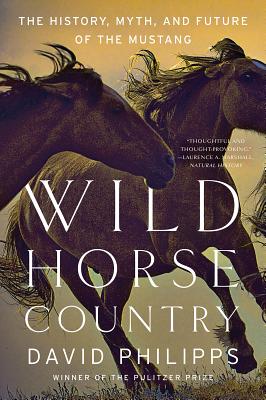 The “insightful [and] even-handed” (Outside) story of a heroic animal whose existence is in danger.

The wild horse, popularly known as the mustang, is so ingrained in the American imagination that even those who have never seen one know what it stands for: freedom, independence, the bedrock ideals of the nation. But in modern times it has become entangled in controversy and bureaucratic mismanagement, and now its future is imperiled. In Wild Horse Country, Pulitzer Prize–winning New York Times reporter David Philipps traces the rich history of wild horses in America and investigates the shocking dilemma they pose in our own time.

David Philipps is a Pulitzer Prize–winning national reporter for the New York Times. He is the author of Lethal Warriors and a graduate of the Columbia School of Journalism. He lives in Colorado with his family.
Wide-ranging [and] scrupulously reported.
— Pia Catton - Weekly Standard

A gripping, myth-busting biography of the mustang.
— Dan Egan, author of The Death and Life of the Great Lakes

A gimlet-eyed look at the place of the wild horse in the landscape of the American West.… Of a piece with Marc Reisner’s Cadillac Desert.