The Last Cowboys: A Pioneer Family in the New West (Paperback) 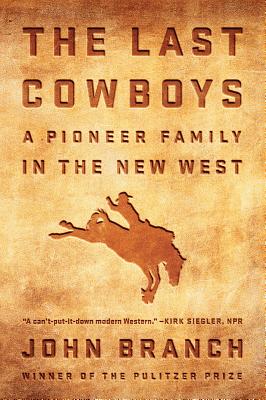 The Last Cowboys: A Pioneer Family in the New West (Paperback)

Longlisted for the PEN/ESPN Award for Literary Sports Writing

The Last Cowboys is Pulitzer Prize-winning reporter John Branch’s epic tale of one American family struggling to hold on to the fading vestiges of the Old West. For generations, the Wrights of southern Utah have raised cattle and world-champion saddle-bronc riders—many call them the most successful rodeo family in history. Now they find themselves fighting to save their land and livelihood as the West is transformed by urbanization, battered by drought, and rearranged by public-land disputes. Could rodeo, of all things, be the answer? Written with great lyricism and filled with vivid scenes of heartache and broken bones, The Last Cowboys is a powerful testament to the grit and integrity that fuel the American Dream.

John Branch is a Pulitzer Prize–winning reporter for the New York Times. He is the best-selling author of Boy on Ice and The Last Cowboys, and has been featured in The Best American Sports Writing. He lives near San Francisco, California.
The Last Cowboys is a beautiful book, threading deep reporting into a gorgeously written narrative. It is American portraiture at its best.

One hell of a ride.
— Carson Vaughan - Washington Post

Remarkable.… [The Last Cowboys] has an uncommon ambition: it’s a story not just of rodeo, but of the contemporary West.

Gripping.… What Branch focuses on so beautifully is how one remarkable American family navigates the situation of wanting to do dangerous, peculiar and deeply impressive kinds of work.
— Nathan Deuel - Los Angeles Times

The Last Cowboys is informed by scrupulous and compassionate reporting, casting light on a side of the sporting world typically hidden from view.

A fascinating dive into what it’s like to make a living by horseback, both on the range and at the rodeo.
— Christopher Collins - Texas Observer

Branch does a beautiful job chronicling a family as it navigates old traditions in a new, fast-paced century.… The Last Cowboys is an excellent, compassionate book.