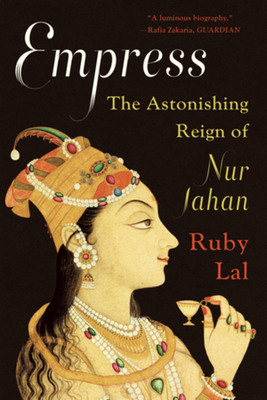 Finalist for the 2018 Los Angeles Times Book Prize in History

Four centuries ago, a Muslim woman ruled an empire. Nur Jahan, daughter of a Persian noble and widow of a subversive official, became the twentieth and most cherished wife of the Emperor Jahangir. Nur ruled the vast Mughal Empire alongside her husband, leading troops into battle, signing imperial orders, and astutely handling matters of the state.

Acclaimed historian Ruby Lal uncovers the rich life and world of Nur Jahan, rescuing this dazzling figure from patriarchal and Orientalist clichés of romance and intrigue, and giving new insight into the lives of women and girls in the Mughal Empire. In Empress, Nur Jahan finally receives her due in a deeply researched and evocative biography that awakens us to a fascinating history.

Ruby Lal is an acclaimed historian of India and a professor of South Asian History at Emory University. She is the author of Empress: The Astonishing Reign of Nur Jahan, Domesticity and Power in the Early Mughal World, and Coming of Age in Nineteenth Century India: The Girl-Child and the Art of Playfulness. She divides her time between Atlanta and Delhi.
In filling in the details of Nur Jahan’s life, Ms. Lal has not only written a revisionist feminist biography; she has also provided a vivid picture of the Mughal court, with its luxuries, beauties, intrigues and horrors.
— Economist

Despite the spare record she has to work with, Lal paints richly detailed scenes from Nur’s life.… Lal ably guides the reader through the rich drama and intrigue of Nur’s later life with Jahangir, whom she married after Quli was killed.… Lal has done a service to readers interested in the Mughal period and the many forgotten or poorly remembered women of Indian history. She has helped shine a little light on an enigmatic character many think they know but few actually understand.
— Vikas Bajaj - New York Times Book Review

Lal’s intriguing biography, with its chronology of her relatively swift rise to power and even swifter descent, restores Nur Jahan to her full splendour.
— Jane Ciabattari - BBC

Intriguing, inspiring, and relevant to us today in twenty-first-century America.
— Azar Nafisi, author of Reading Lolita in Tehran

An absorbing portrait of a remarkable woman, but also offers a stylish reconstruction of a fascinating slice of Mughal life.
— Sameer Rahim - Telegraph

This is an outstanding book, not only incredibly important but also a fabulous piece of writing. Here, India’s greatest empress is reborn in all her fascinating glory in a luminescent account of her life and times. Ruby Lal has written a classic—one of the best biographies to come out this year and certainly the best ever of Nur Jahan.
— Amanda Foreman, author of The World Made by Women

Lal shows that [Nur’s] reign had a lasting effect on female empowerment, enabling royal wives to issue an array of orders beyond the harem.
— The New Yorker

Nur Jahan emerges from this biography as a spirited, brilliant, and gifted leader. Nur’s story weaves into Lal’s gorgeous, nuanced portrait of the glittering splendour of the Mughal Empire and how its political, military, and cultural destinies were shaped by this remarkable refugee-turned-empress
— Gareth Russell, author of Young and Damned and Fair

Lal… paints rich multisensory tapestries… providing context and evidence to show that due to Nur’s surroundings, history, and contemporaries, she was probably a progressive, worldly, multitalented, forward-thinking woman warrior from the outset.… Lal releases Nur from the condescending ways in which previous commentators have trivialized, belittled, and diminished her accomplishments.
— Gary Singh - Los Angeles Review of Books