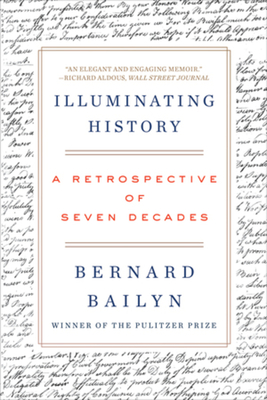 The brilliance of a master historian shines through this “elegant and engaging memoir” of a lifetime’s work (Richard Aldous, Wall Street Journal).

Over a remarkable career Bernard Bailyn has reshaped our understanding of the early American past. Inscribing his superb scholarship with passion and imagination honed by a commitment to rigor, Bailyn captures the particularity of the past and its broad significance in precise, elegant prose. His transformative work has ranged from a new reckoning with the ideology that powered the opposition to British authority in the American Revolution, to a sweeping account of the peopling of America, and the critical nurturing of a new field, the history of the Atlantic world.

Illuminating History is the most personal of Bailyn’s works. It is in part an intellectual memoir of the significant turns in an immensely productive and influential scholarly career. It is also alive with people whose actions touched the long arc of history. Among the dramatic human stories that command our attention: a struggling Boston merchant tormented by the tensions between capitalist avarice and a constrictive Puritan piety; an ordinary shopkeeper who in a unique way feverishly condemned British authority as corrupt and unworthy of public confidence; a charismatic German Pietist who founded a cloister in the Pennsylvania wilderness famous for its strange theosophy, its spartan lifestyle, and its rich musical and artistic achievement. And the good townspeople of Petersham, whose response in 1780 to a draft Massachusetts constitution speaks directly to us through a moving insistence on individual freedoms in the face of an imposing central authority. Here is vivid history and an illuminating self-portrait from one of the most eminent historians of our time.

Bernard Bailyn (1922–2020) was one of our most distinguished and influential historians. A career-long Harvard University professor, he published many groundbreaking histories that earned him two Pulitzer Prizes, the National Book Award, the Bancroft Prize, and the National Humanities Medal.
[Bailyn] transformed the field of early American history as much as any single person could.
— Gordon S. Wood, quoted in the New York Times

Using the chapters in this… book as lamps and signposts, Bailyn has created an elegant roadmap of his intellectual journey.
— George H. Nash - Law & Liberty

In 2020, [Bernard Bailyn] published Illuminating History: A Retrospective of Seven Decades, an intellectual self-portrait that eschews conventional memoir in favor of a series of essays exploring some ‘small, strange, obscure documents and individuals’ that had captured his imagination. In an epilogue, he cautioned, as he often did, against imposing our own sense of certainty on the confusion of the past as it was actually experienced by those who lived it.

‘The fact—the inescapable fact—is that we know how it all came out,’ he wrote, ‘and they did not.’

The most striking takeaway is how much may depend on the random discovery of a single document—how one clue, backed by other evidence, can turn longstanding interpretations on their head.
— Julia M. Klein - Boston Globe

Bailyn has mined the archives. In Illuminating History he explains how he found the golden nuggets and used them over seven decades of scholarship.… At this stage of his remarkable career, Bernard Bailyn has written a book to guide the historians who will write the next Pulitzer Prize works in the field.

In this unusual memoir, Bernard Bailyn reflects on the way his life and historical work have been entwined. The result is creative, compelling, and captivating.
— Mary Beth Norton, Cornell University

Illuminating History casts fresh light on a brilliant career. Bernard Bailyn emerges from its pages as a great historian at the peak of his powers.

In this revealing and deeply personal volume, Bernard Bailyn gives a moving and characteristically literate account of historical sensibility in the second half of the twentieth century.
— Stanley N. Katz, Princeton University

In these engaging essays, Bernard Bailyn reveals the sources of his own creativity as the greatest historian of colonial and revolutionary America.
— Jack Rakove, Stanford University

Bernard Bailyn’s stature rests on imaginative analysis, brilliant insights, and superb, finely honed craftsmanship. All these, and his gift for understanding people,… shine in Illuminating History.