One Mighty and Irresistible Tide: The Epic Struggle Over American Immigration, 1924-1965 (Hardcover) 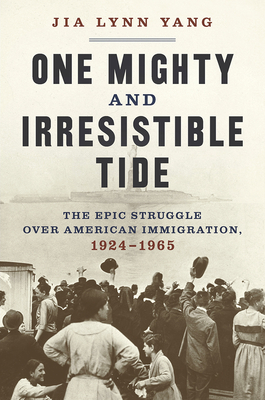 One Mighty and Irresistible Tide: The Epic Struggle Over American Immigration, 1924-1965 (Hardcover)

One of Smithsonian Magazine's Ten Best History Books of 2020

Longlisted for the 2021 Andrew Carnegie Medal

A sweeping history of the twentieth-century battle to reform American immigration laws that set the stage for today’s roiling debates.

The idea of the United States as a nation of immigrants is at the core of the American narrative. But in 1924, Congress instituted a system of ethnic quotas so stringent that it choked off large-scale immigration for decades, sharply curtailing arrivals from southern and eastern Europe and outright banning those from nearly all of Asia.

In a riveting narrative filled with a fascinating cast of characters, from the indefatigable congressman Emanuel Celler and senator Herbert Lehman to the bull-headed Nevada senator Pat McCarran, Jia Lynn Yang recounts how lawmakers, activists, and presidents from Truman through LBJ worked relentlessly to abolish the 1924 law. Through a world war, a refugee crisis after the Holocaust, and a McCarthyist fever, a coalition of lawmakers and activists descended from Jewish, Irish, and Japanese immigrants fought to establish a new principle of equality in the American immigration system. Their crowning achievement, the 1965 Immigration and Nationality Act, proved to be one of the most transformative laws in the country’s history, opening the door to nonwhite migration at levels never seen before—and changing America in ways that those who debated it could hardly have imagined.

Framed movingly by her own family’s story of immigration to America, Yang’s One Mighty and Irresistible Tide is a deeply researched and illuminating work of history, one that shows how Americans have strived and struggled to live up to the ideal of a home for the "huddled masses," as promised in Emma Lazarus’s famous poem.

Jia Lynn Yang, the national editor at The New York Times, was previously deputy national security editor at The Washington Post, where she was part of a team that won a Pulitzer Prize for coverage of Trump and Russia. She lives in Brooklyn, New York.
Anyone who doesn’t understand that we are a nation of immigrants should be given a copy of Yang’s powerful and cogent look at immigrant strictures put in place in 1924 that were revoked by the 1965 Immigration and Nationality Act.
— Bethanne Patrick - Washington Post

A masterly study of political struggle.... Yang has written a captivating account, full of personality and drama—and significance.... worth reading to the last page.
— David M. Shribman - Boston Globe

While ‘we tend to describe immigrants’ stories as feats of will and strokes of destiny,’ Yang reminds us, ‘it is not destiny that brings a family here but politics.’ This is a message worth noting as we approach November.
— David Nasaw - New York Times Book Review

An effort to understand precisely what kind of nation of immigrants we are and how we arrived at this moment in our history.... Admirably thorough.
— Philip Terzian - Wall Street Journal

Yang sketches lively portraits of the famous and obscure players behind the legislative fights.... [Her] voyage across early-20th-century U.S. immigration debates makes palpable how much diplomacy and perseverance are required to win legislative change.
— Laura Wides-Muñoz - Washington Post

Powerful, riveting, and beautifully written, this book tells the story of how the most significant immigration laws in the twentieth century came to pass in the United States. From Takao Ozawa’s heartbreaking bid to become a citizen to our nation’s rejection of Jewish refugees of World War II, Jia Lynn Yang exposes the myth that ours is a nation that has consistently welcomed immigrants. With force and imagination she transports us to the halls of Congress and the White House and shepherds us through four decades of political conflict. This book could not be more timely: In a divisive moment where the place of immigrants in America is bitterly debated, we need this book more than ever. It is essential reading for anyone who wants to understand how politics has shaped, and can shape, the lives of immigrants in the United States.
— Michelle Kuo, author of Reading with Patrick: A Teacher, a Student, and a Life-Changing Friendship

Yang’s compelling history could not be more timely.... The combination of meticulous research and captivating writing creates a beautiful surprise; a dark history that gleams under the spotlight of unvarnished truthtelling. Expect a lot of reader requests and award attention for this significant title.
— Booklist (starred review)

Yang’s comprehensive and easy-to-follow record of a crucial period in the evolution of U.S. immigration policy sheds light on the political, cultural, and historical considerations behind this contentious issue. Readers seeking insights into contemporary proposals to reform the system will find plenty in this lucid account.
— Publishers Weekly

A clear, well-crafted historical overview of U.S. immigration, and the people who shaped it. Yang defines the issues these debates raised but never settled in a way that informs without overwhelming readers.
— Library Journal