Manual for Survival: A Chernobyl Guide to the Future (Hardcover) 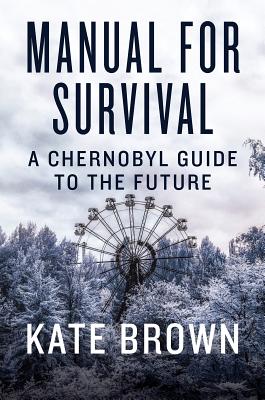 Manual for Survival: A Chernobyl Guide to the Future (Hardcover)

Finalist for the 2019 National Book Critics Circle Award in Nonfiction

A chilling exposé of the international effort to minimize the health and environmental consequences of nuclear radiation in the wake of Chernobyl.

Dear Comrades! Since the accident at the Chernobyl power plant, there has been a detailed analysis of the radioactivity of the food and territory of your population point. The results show that living and working in your village will cause no harm to adults or children.

So began a pamphlet issued by the Ukrainian Ministry of Health—which, despite its optimistic beginnings, went on to warn its readers against consuming local milk, berries, or mushrooms, or going into the surrounding forest. This was only one of many misleading bureaucratic manuals that, with apparent good intentions, seriously underestimated the far-reaching consequences of the Chernobyl nuclear catastrophe.

After 1991, international organizations from the Red Cross to Greenpeace sought to help the victims, yet found themselves stymied by post-Soviet political circumstances they did not understand. International diplomats and scientists allied to the nuclear industry evaded or denied the fact of a wide-scale public health disaster caused by radiation exposure. Efforts to spin the story about Chernobyl were largely successful; the official death toll ranges between thirty-one and fifty-four people. In reality, radiation exposure from the disaster caused between 35,000 and 150,000 deaths in Ukraine alone.

No major international study tallied the damage, leaving Japanese leaders to repeat many of the same mistakes after the Fukushima nuclear disaster in 2011. Drawing on a decade of archival research and on-the-ground interviews in Ukraine, Russia, and Belarus, Kate Brown unveils the full breadth of the devastation and the whitewash that followed. Her findings make clear the irreversible impact of man-made radioactivity on every living thing; and hauntingly, they force us to confront the untold legacy of decades of weapons-testing and other nuclear incidents, and the fact that we are emerging into a future for which the survival manual has yet to be written.

Kate Brown is an award-winning historian of environmental and nuclear history at the Massachusetts Institute of Technology. Her previous book, Plutopia, won seven academic prizes. She splits her time between Washington, D.C., and Cambridge, Massachusetts.
A magisterial blend of historical research, investigative journalism and poetic reportage…. an awe-inspiring journey.
— Economist

In this explosive, exquisitely researched account, Brown draws on four years of fieldwork in Soviet and other archives—27 total, some previously unvisited—and in towns and farms in contaminated territories to provide a powerful story of the devastating health and environmental effects of radioactive fallout in areas outside the 30-kilometer Chernobyl Exclusion Zone… This sobering book should be read—and studied—by policymakers and citizens
— Kirkus (starred review)

With bountiful, devastating detail, Brown describes how doctors, scientists, and journalists—mainly in Ukraine and Belarus—went to great lengths and took substantial risks to collect information…. One of the most alarming—though also eerily beautiful—aspects of Brown’s book is her description of the way radioactive material moves through organisms, ecosystems, and human society…. Manual for Survival asks a larger question about how humans will coexist with the ever-increasing quantities of toxins and pollutants that we introduce into our air, water, and soil. Brown’s careful mapping of the path isotopes take is highly relevant.

Brown’s in-depth research and clean, concise writing illuminate the reality behind decades of ‘half-truths and bald-faced lies.’ Readers will be fascinated by this provocative history of a deadly accident and its consequences
— Publishers Weekly (starred review)

A remarkable book, distinguished by formidable archival history, investigative research, and vivid storytelling. Parts of it grip with the force of a thriller—but again and again, the plot is proved true. A decade’s work has gone into uncovering the real human cost of Chernobyl. Yet this is a book about even bigger subjects than the disaster at its core: about how politics processes disaster, about the unseen legacies of the ‘friendly atom,’ and about the Anthropocene futures faced by the human species, surviving in an epoch of ruin.
— Robert Macfarlane, author of The Old Ways

Kate Brown presents a convincing challenge to the official narrative of the Chernobyl disaster. Deeply reported and elegantly written, Manual for Survival is chilling.

Combining the skills of a historian, investigative reporter, and detective, Kate Brown has blown the lid off the 1986 Chernobyl nuclear disaster and decades of official efforts to suppress its grim truths. Disturbing in its conclusions, destined to incite controversy, Manual for Survival is first-rate historical sleuthing.

Gripping…Kate Brown’s relentless, tenacious reporting shows that Chernobyl isn’t the past at all. Nothing, she makes clear, can stop its radiation from seeping through all attempts to bury the truth for a long time to come. This deftly written, impassioned, courageous book should make the world think twice about what’s at stake when we unleash nuclear reactions.
— Alan Weisman, author, The World Without Us and Countdown

[A] humane and strange book about the irreversible things a technological disaster does to people and landscapes.
— Owen Hatherley - New Statesman

This engagingly written book reads like a cold war thriller and uncovers the devastating effects of one of the world’s worst nuclear disasters.
— Alison MacFarlane, director, Institute for International Science and Technology Policy, George Washington University