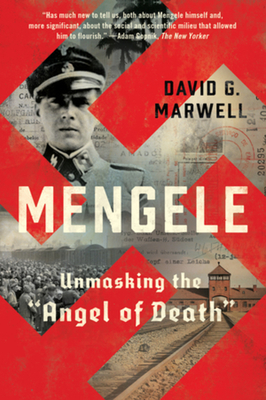 A "gripping…sober and meticulous" (David Margolick, Wall Street Journal) biography of the infamous Nazi doctor, from a former Justice Department official tasked with uncovering his fate.

Perhaps the most notorious war criminal of all time, Josef Mengele was the embodiment of bloodless efficiency and passionate devotion to a grotesque worldview. Aided by the role he has assumed in works of popular culture, Mengele has come to symbolize the Holocaust itself as well as the failure of justice that allowed countless Nazi murderers and their accomplices to escape justice. Whether as the demonic doctor who directed mass killings or the elusive fugitive who escaped capture, Mengele has loomed so large that even with conclusive proof, many refused to believe that he had died.

As chief of investigative research at the Justice Department’s Office of Special Investigations in the 1980s, David G. Marwell worked on the Mengele case, interviewing his victims, visiting the scenes of his crimes, and ultimately holding his bones in his hands. Drawing on his own experience as well as new scholarship and sources, Marwell examines in scrupulous detail Mengele’s life and career. He chronicles Mengele’s university studies, which led to two PhDs and a promising career as a scientist; his wartime service both in frontline combat and at Auschwitz, where his “selections” sent innumerable innocents to their deaths and his “scientific” pursuits—including his studies of twins and eye color—traumatized or killed countless more; and his postwar flight from Europe and refuge in South America.

Mengele describes the international search for the Nazi doctor in 1985 that ended in a cemetery in Sao Paulo, Brazil, and the dogged forensic investigation that produced overwhelming evidence that Mengele had died—but failed to convince those who, arguably, most wanted him dead. This is the riveting story of science without limits, escape without freedom, and resolution without justice.

David G. Marwell, former director of the Museum of Jewish Heritage in New York City, is a historian who has served and led a number of government and nonprofit institutions. He lives in University Park, Maryland, with his wife, Judith.
Has much new to tell us, both about Mengele himself and, more significant, about the social and scientific milieu that allowed him to flourish.
— Adam Gopnik - The New Yorker

Definitive…Marwell’s authority as a scholar of this era is commanding.
— Wendy Lower and Jonathan Petropoulos - Times Literary Supplement

Has all the pleasures of a suspenseful crime novel, and all the inside detail of a police procedural…This absorbing, exhaustively researched work is surely destined to become the standard reference on its subject.
— Bob Goldfarb - Jewish Book Council

Compelling…[A]t once a compact biography of the notorious war criminal, a detailed account of Mengele’s flight to South America, and an absorbing narrative of the quest to bring him to justice.
— Patricia Heberer Rice - Science

The most thorough-going account of Mengele’s life available to date.
— Christopher Priest - The Spectator