These Fevered Days: Ten Pivotal Moments in the Making of Emily Dickinson (Paperback) 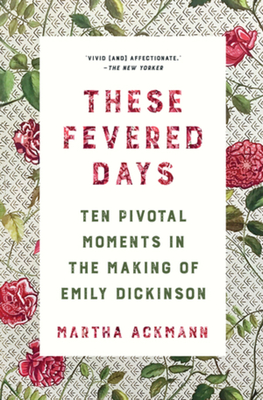 These Fevered Days: Ten Pivotal Moments in the Making of Emily Dickinson (Paperback)

On August 3, 1845, young Emily Dickinson declared, “All things are ready” and with this resolute statement, her life as a poet began. Despite spending her days almost entirely “at home” (the occupation listed on her death certificate), Dickinson’s interior world was extraordinary. She loved passionately, was hesitant about publication, embraced seclusion, and created 1,789 poems that she tucked into a dresser drawer.

In These Fevered Days, Martha Ackmann unravels the mysteries of Dickinson’s life through ten decisive episodes that distill her evolution as a poet. Ackmann follows Dickinson through her religious crisis while a student at Mount Holyoke, which prefigured her lifelong ambivalence toward organized religion and her deep, private spirituality. We see the poet through her exhilarating frenzy of composition, through which we come to understand her fiercely self-critical eye and her relationship with sister-in-law and first reader, Susan Dickinson. Contrary to her reputation as a recluse, Dickinson makes the startling decision to ask a famous editor for advice, writes anguished letters to an unidentified “Master,” and keeps up a lifelong friendship with writer Helen Hunt Jackson. At the peak of her literary productivity, she is seized with despair in confronting possible blindness.

Utilizing thousands of archival letters and poems as well as never-before-seen photos, These Fevered Days constructs a remarkable map of Emily Dickinson’s inner life. Together, these ten days provide new insights into her wildly original poetry and render an “enjoyable and absorbing” (Scott Bradfield, Washington Post) portrait of American literature’s most enigmatic figure.

Martha Ackmann, author of These Fevered Days, Curveball, and The Mercury 13, writes about women who have changed America. The recipient of a Guggenheim fellowship, Ackmann taught a popular seminar on Dickinson at Mount Holyoke College and lives in western Massachusetts.
Vivid [and] affectionate.
— The New Yorker

I quickly came to treasure Ackmann’s ample descriptions, her deep knowledge of the poet’s milieu.… [These Fevered Days is] thoroughly researched, and yet, with Ackmann’s energetic storytelling, alive.

A lucid narrative grounded in solid research colored by appreciative warmth.… These Fevered Days makes Dickinson’s exploration of that wild terrain [of the mind] and that continent of language palpable, exciting, and accessible.

Highly readable.… By the end, you’ll be a believer, in part because of Ackmann’s grasp on her subject—both the mountains of scholarship on Dickinson as well as the poet’s historical and cultural milieu—and Ackmann’s own formidable gifts as a storyteller.
— Ann Levin - Associated Press

Ackmann, a lifelong Dickinson scholar, has a deep empathy for Dickinson’s struggles, an expert’s knowledge of her poetry and an elegant writing style that will engage even those familiar with Dickinson’s story.
— Mary Ann Gwinn - Seattle Times

Many thousands of pages have been written about Emily Dickinson, but few capture the elusive Belle of Amherst as succinctly and vividly as Martha Ackmann’s These Fevered Days.

Martha Ackmann is a rare scholar. She is steeped in her subject’s work, but also fills her book with the light and sounds of Dickinson’s home. Dickinson is at once the most mysterious and yet most accessible of American poets, and she led what has been called the most remarkable unremarkable life in American letters. Ackmann does justice to this creative paradox in her warm and stirring book.
— Cullen Murphy, Editor-at-Large for the Atlantic

Using an ingenious device to capture the whole of Emily Dickinson’s life by presenting it in ten distinct tableaux, Martha Ackmann illuminates the poet from her first word as a toddler, ‘music,’ to her final written ones, ‘called back.’ In These Fevered Days, the author describes a gift from Dickinson to a friend as ‘exquisite, tender, and intimate,’ words that aptly describe Ackmann’s latest triumph.
— Madeleine Blais, Pulitzer Prize–winning journalist

This utterly enchanting book invites us into the world Emily Dickinson inhabited and made. With exquisite sensitivity to poet and place, Martha Ackmann illuminates a life simple and complex. Treasures abound on every page.
— Ellen Fitzpatrick, author of The Highest Glass Ceiling