Into the Great Emptiness: Peril and Survival on the Greenland Ice Cap (Hardcover) 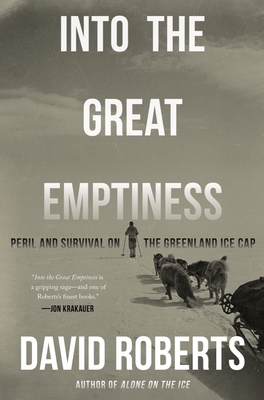 Into the Great Emptiness: Peril and Survival on the Greenland Ice Cap (Hardcover)

The riveting story of one of the greatest but least-known sagas in the history of exploration from David Roberts, the “dean of adventure writing.”

By 1930, no place in the world was less well explored than Greenland. The native Inuit had occupied the relatively accessible west coast for centuries. The east coast, however, was another story. In August 1930, Henry George Watkins (nicknamed “Gino”), a twenty-three-year-old British explorer, led thirteen scientists and explorers on an ambitious expedition to the east coast of Greenland and into its vast and forbidding interior to set up a permanent meteorological base on the icecap, 8,200 feet above sea level. The Ice Cap Station was to be the anchor of a transpolar route of air travel from Europe to North America.

The weather on the ice cap was appalling. Fierce storms. Temperatures plunging lower than –50° Fahrenheit in the winter. Watkins’s scheme called for rotating teams of two men each to monitor the station for two months at a time. No one had ever tried to winter over in that hostile landscape, let alone manage a weather station through twelve continuous months. Watkins was younger than anyone under his command. But he had several daring trips to the Arctic under his belt and no one doubted his judgement.

The first crisis came in the fall when a snowstorm stranded a resupply mission halfway to the top for many weeks. When they arrived at the ice cap, there were not enough provisions and fuel for another two-man shift, so the station would have to be abandoned. Then team member August Courtauld made an astonishing offer. To enable the mission to go forward, he would monitor the station solo through the winter. When a team went up in March to relieve Courtauld, after weeks of brutal effort to make the 130-mile journey, they could find no trace of him or the station. By the end of March, Courtauld’s situation was desperate. He was buried under an immovable load of frozen snow and was disastrously short on supplies. On April 21, four months after Courtauld began his solitary vigil, Gino Watkins set out inland with two companions to find and rescue him.

David Roberts, “veteran mountain climber and chronicler of adventures” (Washington Post), draws on firsthand accounts and archival materials to tell the story of this daring expedition and of the epic survival ordeal that ensued.

David Roberts (1943–2021) is the author of thirty books on mountaineering, exploration, and anthropology. His books have won the Boardman Tasker Award for Mountain Literature and the Grand Prize at the Banff Mountain Book Competition.
For the subject of what turned out to be his final project, David Roberts selected a fascinating, little-known British explorer with odd charisma and an insatiable hunger for treacherous adventures. Into the Great Emptiness is a gripping saga—and one of Roberts’ finest books.

Roberts knows how to tell a good story, and he draws on firsthand accounts from team members to depict their excursions in harrowing detail. Perfect for fans of adventure stories, this one hits all the marks.
— Publishers Weekly