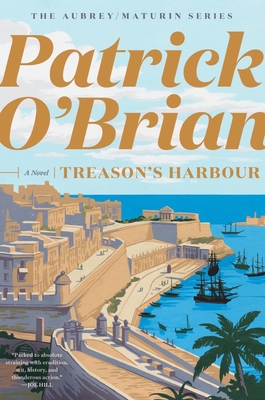 This is book number 9 in the Aubrey/Maturin Novels series.

Stranded in Malta, Captain Jack Aubrey and surgeon Stephen Maturin must be careful, for the salons and dockyards are infested with Napoleon’s spies, and there is a traitor in the British intelligence network. This installment of Patrick O’Brian’s “20-volume masterpiece” (Christopher Hitchens) takes Aubrey and Maturin sailing on the pirate-plagued waters of the Red Sea, trudging over the Sinai Peninsula and even the depths of the sea floor in their efforts to stay one step ahead of the treachery afoot.

One of our greatest contemporary novelists, Patrick O’Brian is the author of the twenty volumes of the best-selling Aubrey/Maturin series, as well as many other books, including Testimonies, The Golden Ocean, The Unknown Shore, and biographies of Joseph Banks and Picasso.
An entire, discrete and compelling world, a totally believable entity which one might wish to inhabit.
— Kevin Myers - Irish Times

The deep pleasures of O’Brian’s writing [are]: his wonderfully exact language, his erudition, his delight in human idiosyncrasy, his fine hand with character, his zest for the nitty-gritty of life and for life itself.
— Chicago Tribune