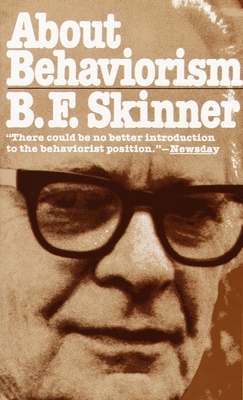 
Not On Our Shelves—Ships in 1-5 Days
The basic book about the controversial philosophy known as behaviorism, written by its leading exponent.
B.F. SKINNER presented a formulation of operant behavior and a method for its investigation that are basic to the analysis of behavior now practiced in hundreds of laboratories throughout the world. For this work, Dr. Skinner was given teh National Medal of Science by President Lyndon Johnson and the Gold Medal of the American Psychological Foundation. Many practical applications of the method have been made in other sciences, such as physciology and psycho-pharmacology. The principles of operant conditioning led to programmed instruction and the modern conception of teaching machines, for which Dr. Skinner received many awards from educational organizations. He was also responsible for the first research in what has come to be called behavior therapy.
"A much more effective work than Beyond Freedom and Dignity precisely because it takes more seriously the tradition (or the historical prejudices) of its opposition." —Robert Kirsch, Los Angeles Times

"About Behaviorism is an opportunity to match wits with one of the great men of psychology and to participate in some of its great debates." —James B. Rule, Newsday

"The battle over Skinner's ideas is just beginning. It promises to be one of the most interesting contests of our generation." —Gail Boyer, St. Louis Post-Dispatch