There Is a River: The Story of Edgar Cayce (Paperback) 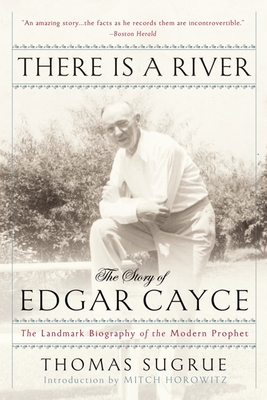 There Is a River: The Story of Edgar Cayce (Paperback)


Special Order—Subject to Availability
A new edition of the landmark, worldwide bestseller on the life of the famed medical clairvoyant and founding father of the New Age: Edgar Cayce.

Edgar Cayce (1877-1945) is known to millions today as the grandfather of the New Age.  A medical clairvoyant, psychic, and Christian mystic, Cayce provided medical, psychological, and spiritual advice to thousands of people who swore by the effectiveness of his trance-based readings.

But Cayce was not always a household name. When a young, skeptical journalist named Thomas Sugrue first met Cayce in 1927 the world had not yet heard of the "sleeping prophet.” During years of unique access, Sugrue completed his landmark biography, which on its publication in 1942 brought national attention to Cayce and stands as the sole record written during the seer’s lifetime.

This edition includes a new introduction by historian Mitch Horowitz that highlights the enduring significance of Cayce’s message and the role this book played in its dissemination.
Thomas Sugrue (1907-1953) was a widely respected and world-travelled journalist who wrote for many of the nation’s leading newspapers and magazines. Sugrue sought medical help through Edgar Cayce’s channeled readings, and went on to become both Cayce’s biographer and a lifelong supporter.
“A classic and a must for all those who desire to expand and honor their heart.”
—Gerald Jampolsky, M.D., author of Love Is Letting Go of Fear

“An amazing story…the facts as he records them are incontrovertible.”
—Boston Herald

“No fiction could be stranger…To read There Is a River cannot help being an adventure.”
—Mary Ross, New York Herald Tribune

“An irreplaceable record of Cayce’s development as a spiritual messenger…a formative document of New Age spirituality.” —from the introduction by Mitch Horowitz