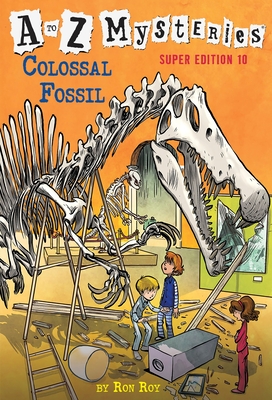 This is book number 10 in the A to Z Mysteries series.

In the tenth A to Z Mysteries Super Edition, Dink, Josh, and Ruth Rose have a sleepover . . . with a Spinosaurus!

It's sleepover night at a science museum in Boston. Dink, Josh, and Ruth Rose can't wait to settle their sleeping bags near the museum's colossal fossil--a giant Spinosaurus skeleton--and tour the exhibits long after closing time. But after they fall asleep, they wake to a terrible crash! Is the dinosaur fossil damaged? Or is there another big problem at the science museum?

Help Dink, Josh, and Ruth Rose solve mysteries from A to Z! From The Absent Author to The Zombie Zone, there's a mystery for every letter of the alphabet, plus ten super editions with even more A to Z fun. And don't miss Ron Roy's series for younger readers, Calendar Mysteries!
RON ROY has been writing books for children since 1974. He is the author of dozens of books, including the popular A to Z Mysteries and Capital Mysteries series. When not working on a new book, Ron likes to teach tricks to his dog Pal, play poker with friends, travel, and read thrilling mystery books. Visit Ron online at RonRoy.com.

JOHN STEVEN GURNEY has illustrated many books for children, including the entire A to Z Mysteries series and Scholastic's popular Bailey School Kids series.