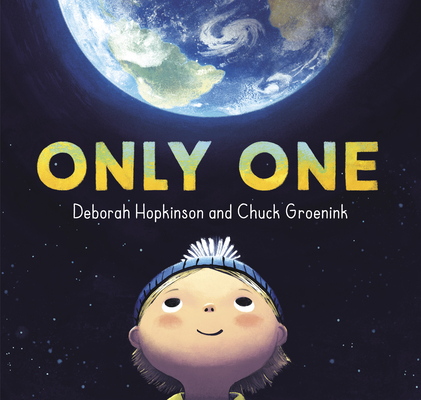 
In Stock—Click for Locations
This lyrical, environmentally focused picture book showcases the unique beauty of our one and only universe--its galaxies, stars, and planets--as well as our one and only Earth and the precious life it contains.


Join one girl as she leads her friends to a tree-planting ceremony. Along the way, she explains in simple language the value of the universe and Planet Earth. Readers will see the Big Bang, the Milky Way, all the planets in the solar system, as well as Earth's atmosphere, and the life within it: its oceans, trees, bugs, and seven billion human beings. Finally, the girl and her friends plant a tree--doing one small thing to help their one special planet.

Both informative and inspiring, here is a beautifully written and gorgeously illustrated science picture book about our universe that will encourage young readers and listeners to protect and preserve the environment.
Deborah Hopkinson is the author of many highly acclaimed picture books, including A Letter to My Teacher, which received two starred reviews, and the modern classic Sweet Clara and the Freedom Quilt, which the New York Times called "inspiring." Her other books include Sky Boys: How They Built the Empire State Building, a Boston Globe-Horn Book Honor Book; and Abe Lincoln Crosses a Creek: A Tall, Thin Tale, an ALA-ALSC Notable Children's Book. She lives in Oregon with her family. Visit her at deborahhopkinson.com.

Chuck Groenink is the illustrator of 16 Words by Lisa Rogers, which the New York Times described as "warm and cozy," as well as Hank's Big Day by Evan Kuhlman, which received three starred reviews. His other picture books include William's Winter Nap by Linda Ashman, which PW described "as adorable as it gets" in a starred review. Chuck graduated from the Artez Institute of Visual Arts in 2004. Visit him on the web at chuckgroenink.com or on Twitter at @ChuckGroenink.