Redefining Family Law in India: Essays in Honour of B. Sivaramayya (Hardcover) 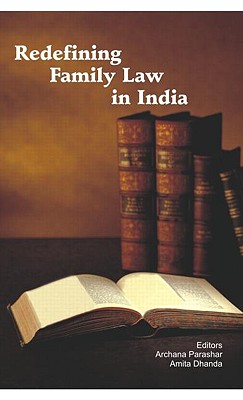 Redefining Family Law in India: Essays in Honour of B. Sivaramayya (Hardcover)

This volume is a collection of articles by scholars across disciplines to create a discourse of family law independent of Religious Personal Law, whilst striving for fairness and justice to all. It demonstrates the artificiality of the public-private divide and seeks the systematic development of ideas for a fair and just family law in contemporary India.

The book does not merely document the pathologies of power within the family but also makes proposals for remedying these inequities. It is not confined to considering what changes need to be inducted into existing family law to make it more just, but also strategises on the means and methods of effecting the change. It lifts the familial veil and scrutinises the status, rights and disabilities of some of the subordinated members of the family. The volume is an invitation to redefine family law with the twin tools of reflection and responsibility.

It will interest those in law judges, legislators, law reformers as well as those in women and family studies, policy makers and policy analysts, apart from the general reader.

Archana Parashar is Associate Professor in Law at Macquarie University, Sydney, Australia. She has an abiding interest in Western Feminist theory, its presence in contemporary legal theory, and its relevance for women in the third world and immigrant women in Australia. She has published many articles on the subject of women's position under the personal laws, the relevance of legal pluralism, and its implications for gender justice in the Indian family laws. She is the author of Women and Family Law Reform in India (1992) and has co-edited (with Amita Dhanda) Engendering Law: Essays in Honour of Lotika Sarkar (1999). Amita Dhanda is Professor of Law at the National Academy ofLegal Studies and Research (NALSAR), Hyderabad, India. Shehas been studying closely the legal processes which contributeto conditions of exclusion and marginalisation, and exploringlegal strategies that can reverse the process. She has written extensivelyon the legal position of persons with psychosocial and intellectualdisabilities. She is the author of Legal Order and MentalDisorder (2000); co-author of On Their Own (2005); and jointlyrevised Bindra's Interpretation of Statutes (2007). She has also co-edited (with Archana Parashar) Engendering Law: Essays inHonour of Lotika Sarkar (1999).