Resisting Injustice and the Feminist Ethics of Care in the Age of Obama: "Suddenly, ... All the Truth Was Coming Out" (Routledge Research in American Politics and Governance #6) (Hardcover) 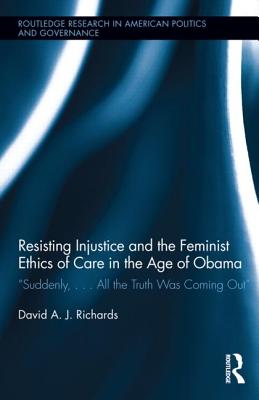 Resisting Injustice and the Feminist Ethics of Care in the Age of Obama: "Suddenly, ... All the Truth Was Coming Out" (Routledge Research in American Politics and Governance #6) (Hardcover)

By David A. J. Richards

David A. J. Richards's Resisting Injustice and The Feminist Ethics of Care in The Age of Obama: Suddenly, ...All The Truth Was Coming Out builds on his and Carol Gilligan's The Deepening Darkness to examine the roots of the resistance movements of the 1960s, the political psychology behind contemporary conservatism, and President Obama's present-day appeal as well as the reasons for the reactionary politics against him.

Richards begins by laying out the basics of the ethics of care and proposing an alternative basis for ethics: relationality, which is based in convergent findings in infant research, neuroscience, and evolutionary psychology. He critically analyzes patriarchal politics and states that they are rooted in a reactionary psychology that attacks human relationality and ethics. From there, the book examines the 1960s resistance movements and argues that they were fundamentally oriented around challenging patriarchy. Richards asserts that the reactionary politics in America from the 1960s to the present are in service of an American patriarchy threatened by the resistance movements ranging from the 1960s civil rights movements to the present gay rights movement. Reactionary politics intend to marginalize and even reverse the ethical achievements accomplished by resistance movements--creating, in effect, a system of patriarchy hiding in democracy. Richards consequently argues that Obama's appeal is connected to his challenge to this system of patriarchy and will examine both Obama's appeal and the reactions against him in light of the 2012 presidential election.

This book positions recent American political development in a broad analysis of the role of patriarchy in human oppression throughout history, and argues that a feminist-based ethics of care is necessary to form a more humane and inclusive democratic politics.

David A.J. Richards is Edwin D. Webb Professor of Law at New York University School of Law, where he teaches constitutional law and criminal law and, with Carol Gilligan, a seminar, Resisting Injustice. He is the author of seventeen books, including, most recently, Disarming Manhood: The Roots of Ethical Resistance (2005); The Case for Gay Rights: From Bowers to Lawrence and Beyond (2005); Patriarchal Religion, Sexuality, and Gender: A Critique of New Natural Law (with Nicholas Bamforth, 2008); The Deepening Darkness: Patriarchal Resistance and Democracy's Future (with Carol Gilligan, 2009); Fundamentalism in American Religion and Law: Obama's Challenge to Patriarchy's Threat to Democracy (2010), and The Rise of Gay Rights and the Fall of the British Empire: Liberal Resistance and the Bloomsbury Group (forthcoming, 2013).