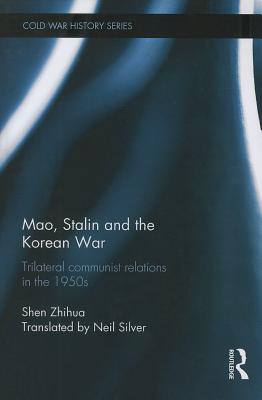 This book examines relations between China and the Soviet Union during the 1950s, and provides an insight into Chinese thinking about the Korean War.

This volume is based on a translation of Shen Zihua's best-selling Chinese-language book, which broke the mainland Chinese taboo on publishing non-heroic accounts of the Korean War.The author combined information detailed in Soviet-era diplomatic documents (released after the collapse of the Soviet Union) with Chinese memoirs, official document collections and scholarly monographs, in order to present a non-ideological, realpolitik account of the relations, motivations and actions among three Communist actors: Stalin, Mao Zedong and Kim Il-sung.

This new translation represents a revisionist perspective on trilateral Communist alliance relations during the Korean War, shedding new light on the origins of the Sino-Soviet split and the rather distant relations between China and North Korea. It features a critical introduction to Shen's work and the text is based on original archival research not found in earlier books in English.

This book will be of much interest to students of Communist China, Stalinist Russia, the Korean War, Cold War Studies and International History in general.

Author Shen Zhihua is professor of history at East China Normal University and Director of the Cold War History Studies Center on the Shanghai campus. He is also an adjunct professor of history at Peking University. He is author of several books on the cold war in Chinese.Translator and Editor Neil Silver is a retired U.S. diplomat who worked in, on and around China. He served in embassies in Beijing, Tokyo, and Moscow, including as Minister-Counselor for Political Affairs in Beijing and Tokyo, and, in the State Department, worked on Chinese, Japanese, Korean, and Southeast Asian affairs.