Code Talker: The First and Only Memoir By One of the Original Navajo Code Talkers of WWII (Paperback) 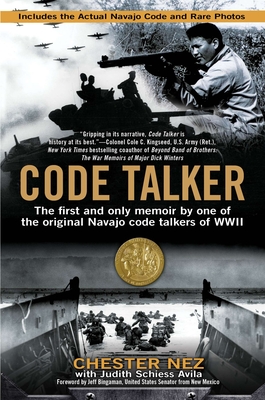 Code Talker: The First and Only Memoir By One of the Original Navajo Code Talkers of WWII (Paperback)


Not On Our Shelves—Ships in 1-5 Days
The first and only memoir by one of the original Navajo code talkers of WWII.

His name wasn’t Chester Nez. That was the English name he was assigned in kindergarten. And in boarding school at Fort Defiance, he was punished for speaking his native language, as the teachers sought to rid him of his culture and traditions. But discrimination didn’t stop Chester from answering the call to defend his country after Pearl Harbor, for the Navajo have always been warriors, and his upbringing on a New Mexico reservation gave him the strength—both physical and mental—to excel as a marine.

During World War II, the Japanese had managed to crack every code the United States used. But when the Marines turned to its Navajo recruits to develop and implement a secret military language, they created the only unbroken code in modern warfare—and helped assure victory for the United States over Japan in the South Pacific.

INCLUDES THE ACTUAL NAVAJO CODE AND RARE PICTURES
Chester Nez was a World War II veteran who indispensably served his country as a Navajo code talker. He passed away in 2014.

Judith Schiess Avila is a code talker scholar with the New Mexico Endowment for the Humanities Chautauqua Program. She tours the state giving presentations on the topic.
Praise for Code Talker

“Gripping in its narrative, Code Talker is history at its best.”—Colonel Cole C. Kingseed, U.S. Army (Ret.), co-author of Beyond Band of Brothers: The War Memoirs of Major Dick Winters

“A fascinating inside look at one of WWII’s most closely guarded secrets…This is an important book, a previously untold piece of our history.”—Marcus Brotherton, author of Shifty’s War

“You don’t need to be a fan of World War II literature to appreciate this memoir…a fascinating melange of combat in the Pacific theater, the history of the Navajo people and the development of a uniquely American code.”—Associated Press

“A unique, inspiring story by a member of the Greatest Generation.”—Kirkus Reviews

“A remarkably affecting first-person account of the Navajo Marines who served their country with distinction through some of the worst battles of the Pacific theater.”—The Washington Times